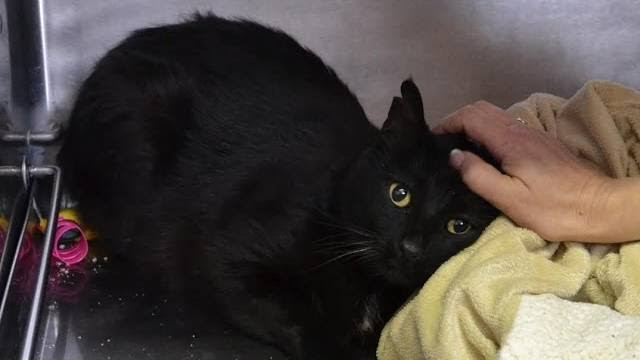 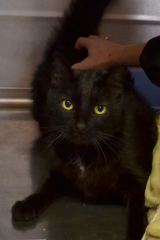 In the early morning hours of December 24, Helen Woodward Animal Center staff in San Diego, CA stumbled upon a tiny, furry, Christmas Eve guest. Heading into the adoptions building, they noticed a small crate. Inside a male, seven-year-old, domestic short-haired cat had been abandoned with only a note.

Unable to care for him any longer, the former owner expressed an apology and a reassurance that the feline was up-to-date on his shots as of last year. Center staff has renamed the affectionate cat George Bailey after the lead character in the holiday film, It’s a Wonderful Life.

Poor George had his life turned upside down at a time when many pets and their families are celebrating togetherness.

While George’s owner may have been uncaring, it is also very possible that giving him up may have broken their heart. He was left at Helen Woodward Animal Center, where they knew he would be safe and well cared for.

George is seen basking in the attention he is receiving from a shelter staffer in this video update from December 30. He loves being petted and is very friendly and affectionate.

Helen Woodward Animal Center said on December 24: “He is confused and sad, but enjoys pets and gentle reassurance. We renamed him “George Bailey” because this darling boy needs an angelic adopter to prove to him that his life has meaning after all.” Less than a week later, George is doing much better and basking in the attention he gets from his new friends.

He will be available for adoption soon.