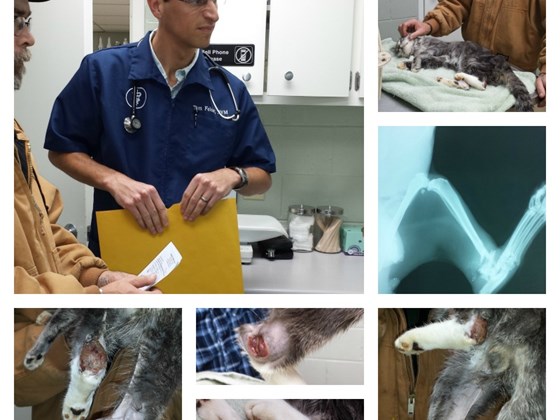 The Community Pet Project of Simpsonville, SC is fundraising to get help ASAP for an injured Marietta, SC cat named Jiggles who needs medical attention sooner than later for injuries sustained in a shooting incident. Jiggles’ family loves their pet but is not in a position to pay for his unexpected and much-needed medical care.

Community Pet Project founder Debbie Cabaniss wrote at the The Community Pet Project Facebook page, saying: “I don’t really ever come flat out and ask anybody for anything, but this once I will. Jiggles’ Mom cannot be more down on her luck. She’s had massive injuries to her face and is scheduled for reconstructive surgery next week. She is out of work because of [a] motor vehicle accident and she simply needs help for her terribly injured cat. ”

Debbie Cabaniss tells the story of Jiggles’ injury and her organization’s efforts to get him help at the Let’s mend Jiggles in time for Christmas! fundraising page at YouCaring.com, which we are reprinting here in full, as follows:

Jiggles is a two year old beautiful, male cat. About 2 weeks ago, he was let outside to go potty, but did not return. His Mom and Dad searched frantically everyday – never giving up hope.

[This Tuesday] morning, Jiggles was found laying outside on the ground. At first, it was thought that he had been attacked by a coyote looking at his open wounds. But, all that was truly known for sure was that Jiggles was critically injured and somehow he managed to drag himself back home to his loving family.

Racing about to find immediate help, his Mom began the search to locate an organization willing to help with medical expenses because they simply lack the means at all. They are by definition poor.

After placing several calls and the last one being a call to a nonprofit, whose Rep instructed her to put a bullet in Jiggles’ head, Jiggles’ Mom stumbled upon The Community Pet Project. That’s when a post was made on Facebook to solicit donations and they began to come in. Problem is, it’s far from enough.

Poinsett Animal Hospital was called this morning and an appointment for Jiggles was set for 11:20 am. I joined Jiggles’ Mom and Dad there for the evaluation to, of course, hear and see the extent of Jiggles’ injuries for myself and to request an approximate cost to put Jiggles on the mend.

Dr. Felder determined that Jiggles back legs had been broken from the knee down and, obviously, that he had painful infected open wounds and injuries. He followed that with stating that he felt strongly that Jiggles had been hit by a car although Jiggles’ Mom stated she did not believe that could have happened. Tearfully though, both Jiggles’ Mom and Dad listened and then Jiggles was administered pain meds and taken to x-ray.

What the x-ray showed was that, indeed, both of Jiggles legs had been damaged / broken, but what the x-ray “revealed” was that these injuries were the result of having been shot! Dr. Felder showed the x-rays and explained that one of the legs appeared to be on the mend somewhat, although infected, and the other one was shattered. He stated that his office does not perform reconstructive surgery, but gave references for others.

After Jiggles’ Mom and Dad was handed a prescription for antibiotics and pain meds, the bill was paid by The Community Pet Project (you Folks) and we were told that Jiggles must receive immediate care ASAP for his injuries. On the way home, I dropped Jiggles x-rays off at Foothills Veterinary Hospital, where the surgery will be performed once adequate funds have been collected.

Therefore, please join us in our efforts to provide urgent care to Jiggles. There is simply no time to waste in this matter so please give today. Jiggles must be taken into surgery and the good thing is, as Dr. Felder stated, cats are very tough. I can personally attest to this because I, myself, saw a clear-eyed Jiggles kneeding a blanket.

Please know, Jiggles’ Mom and Dad would do anything for Jiggles themselves, but they simply have nothing whatsoever to give. What they do give though is priceless. That’s the love that they have for their “boy”, as Jiggles’ Dad refers to him, and to “my baby”, as his Mom refers to him. Both are nice, humble, grateful people and you would truly enjoy knowing them and their heart.

The Community Pet Project is a 501(c)3 Nonprofit – making your gift a tax-deductible contribution.

Anyone who wishes to donate toward the effort’s $3,500 goal can do so here: YouCaring fundraising page: Let’s mend Jiggles in time for Christmas!

Those trying to help Jiggles and his family would appreciate it if readers would share his story and the link to the fundraiser.

Special thanks go to Examiner animal advocacy writer Elisa Black-Taylor, who published a story on The Community Pet Project’s efforts to help Jiggles and and his family earlier today.

It is not known who hurt Jiggles, but his is not the only recent animal cruelty case in the area. As Ms, Black-Taylor points out in her article, Marietta residents are advised to watch out for their pets and keep them inside.