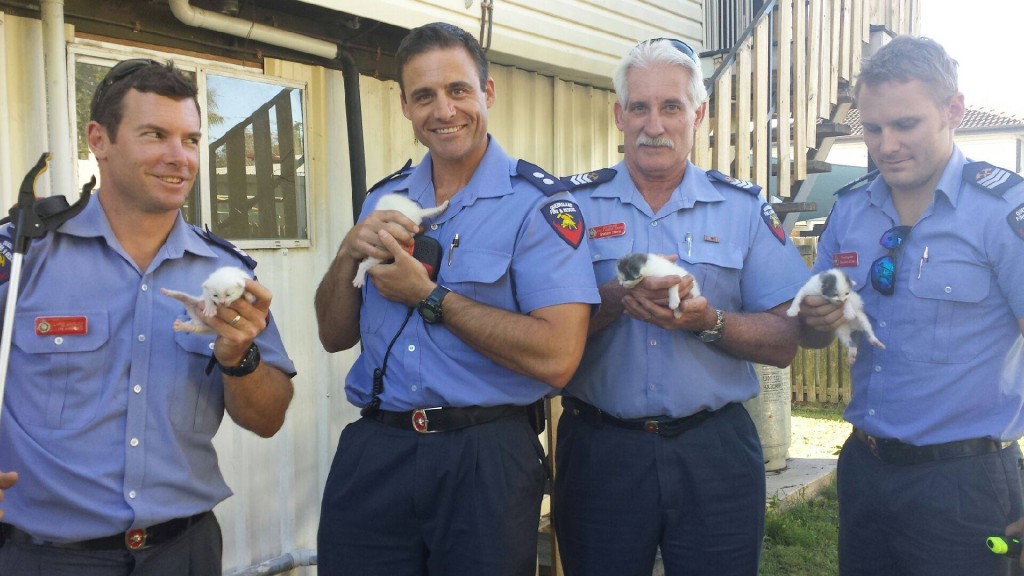 Firefighters with the Ripley Valley Rural Fire Brigade in Queensland, Australia saved a litter of one week old kittens trapped in a Flinders View home, making the rescue the day before the residents and mama cat were scheduled to move out.

Queensland Fire and Emergency Services – QFES shared this aww-inspiring photo with the rescuers and their little rescuees on Tuesday, and wrote: “Acting Station Officer Jed Crosby and his crew from Ripley Fire Station purrrformed a high-stakes rescue today, saving four tiny kittens who were trapped within a residential roof space after their pregnant mum climbed in there a week ago. All of the fur-babies have been reunited with mother cat and are doing well.”

Mama kitty’s owner visited the fire station on Tuesday afternoon, hoping to get help. Mama kitty climbed through a small opening between floors and had her kittens in a spot where her owner couldn’t get to them. On Tuesday, the kittens were just beyond arm’s reach and the householder was desperate to get to them before moving from the home.

Acting station officer Jed Crosby said the kittens were too young, weak and fragile to navigate across the rafters, and they needed help.

Unable to use their regular rescue equipment with the tiny kittens, the firefighters use a tool with a plastic claw at the end. During the 20 minute rescue operation, the crew brought the kittens to safety, one by one, by the light of a torch lamp shone into the rafters.

“It was just enough [space in the opening] for us to shine a torch through to see their tiny heads,” Crosby said.

Crosby said of the rescue, “It was something a little out of left field. It’s not something we get trained in doing.”