Two cats at a Japanese fish farm are happy living in a little home specially made for them on a floating platform on the water.

Mother and daughter kitties Chii and Dorami livemostly on the water at the Kudamatsu municipal fish farming center on Kasado Island, Japan.

“I think of them as family members,” said Satoru Kuramoto, an official at fish farm, who feeds the cats.

“The cats give a great boost to the employees here who have to work alone at sea,” director of operationsYuji Kuyama added.

Chii’s parents were also seagoing cats, and a local fisherman gave them to an employee at the center more than 20 years ago. Workers made the cats a little house on a floating platform that also has a play area for the felines.

Chii and Dorami occasionally fall into the water, but can swim and easily get back on board the platforms. They sometimes put their paws into the water going after small fish, but never go for the tiger puffer fish being raised at the center on a trial basis.

When birds try to catch the puffer fish the cats try to chase them away.

Employees say they have evacuated the cats to a warehouse on land during typhoons but the animals seemed more comfortable and at ease once they returned to their home on the water.

You can see Chii and Dorami in the video below. 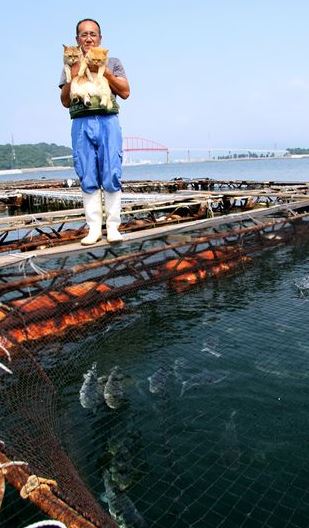 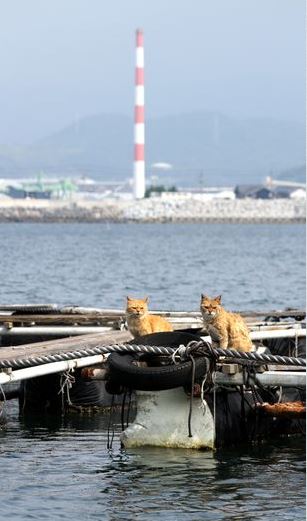