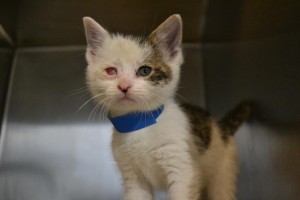 Buffalo was only six weeks old when he was rescued from a park in one of the most impoverished neighborhoods of Chicago. He was suffering from an eye condition that would have been a death sentence had he remained at the local shelter where he had been brought.

When the staff at PAWS Chicago found the adorable kitten at the shelter, his right eye was still being neglected after clearly suffering from trauma. They decided to rescue him from likely euthanasia and the veterinary team immediately went to work to diagnose his eye problem.

It turned out that his eyelid had been fused to his cornea, so he was scheduled for surgery. He had already lost site in that eye, but at least his life was saved.

Once Buffalo was medically cleared, he made his way to the adoption center where he won the hearts of a wonderful, loving family. 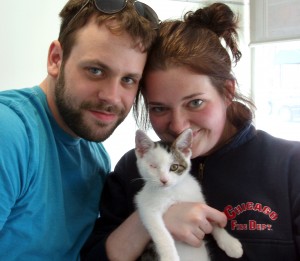 Thanks to PAWS Chicago’s rescue efforts, Buffalo will never need to know the trauma of the streets or the fear of imminent euthanasia again.

PAWS Chicago is a national model in no-kill animal welfare with a mission to build no-kill communities that respect and value the life of every cat and dog, end the overpopulation of homeless animals, and transform animal welfare by promoting transparency and setting higher standards in the way animals are cared for in shelters. Since their founding in 1997, the number of homeless pets killed in Chicago has dropped by nearly 70%, from 42,561 pets to fewer than 14,000.

In 2013, PAWS Chicago will find new homes for 6,000 pets through its cageless No-Kill Adoption Center and perform more than 18,000 low-cost spay/neuter surgeries in disadvantaged communities through its Lurie Spay/Neuter Clinic and GusMobile Spay/Neuter Van.  PAWS Chicago is also rated in the top 1% of charities in the nation for efficient use of donor funds according to the independent charity evaluator, Charity Navigator.