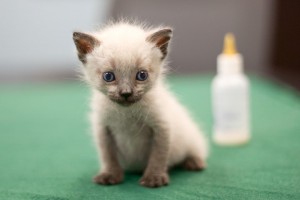 Like many newborns, Oliver can be a bit fussy. The tiny two week old kitten lets out a faint meow and squirms in a bright red blanket until he gets the first drop of milk, then settles in for a feeding. Instead of a mother cat, Oliver’s milk is being delivered from a bottle bigger than he is by a volunteer at Best Friends Animal Society Adoption Center in Mission Hills.

Oliver is one of the lucky ones. Of the 13,000 healthy, treatable pets killed at Los Angeles City animal shelters in 2012, more than 6,000 were neonatal kittens. The tiny creatures, often abandoned at birth or turned into shelters from accidental litters, had very little hope of growing up and getting adopted until the Best Friends center opened a neonatal kitten nursery in February 2013.

Staffed with a dedicated coordinator and supported by a cadre of devoted volunteers who sign up for two hour feeding shifts 24 hours a day, the neonatal nursery, a program of the Best Friends’ No-Kill Los Angeles initiative, has a goal of saving 1,800 lives in 2013. More than 700 precious lives have been saved to date.

“With the help of the NKLA (No Kill Los Angeles) coalition, working closely with Los Angeles Animal Services, we have made significant inroads into saving the lives of these helpless kittens,” says Marc Peralta, executive director of Best Friends Animal Society Los Angeles. “There just wasn’t a safety net in place for these cats or enough resources to provide round-the-clock care before.”

Similar to a real nursery, the neonatal cat area features stuffed animals, festive décor, and rocking chairs amongst its many cages and incubator crates. Volunteer Cheryl Garcia of Granada Hills started bottle feeding the kittens in late May and now comes to the center three days a week for late morning or afternoon shifts.

“You’re a good baby,” Garcia says softly to Wimbley, a scrappy brown male tabby, before kissing him gently on the head and placing Wimbley on a small scale.

The kitten weighs in at 315 grams, up from 250 grams just a week before, and Garcia is pleased. “It’s very gratifying knowing the time I spend here is saving a life,” she says.

According to Nicole Swartzlander, neonate program coordinator, volunteers are a key component to the nursery’s success. “There aren’t enough hours in the day for our cat team to feed everyone. Without the volunteers, we couldn’t save the numbers we have. They make the place run,” she says with a smile. 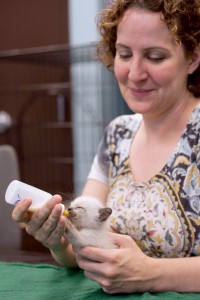 There are many reasons for the exploding cat population in Los Angeles, as Swartzlander outlined. “Cat pregnancies last just two months and it only takes a month after birth for cats to become pregnant again,” she says. “Plus, cats can get pregnant at just four months of age.”

That’s why spaying and neutering is so crucial. Studies show that two unaltered cats and their offspring can result in the birth of up to 420,000 cats in a seven year period. As such, the Best Friends Adoption Center offers free spay or neuter surgeries for owned cats of Los Angeles City residents at its state-of-the-art medical facility.

“If our communities would make spay/neuter a priority, we wouldn’t have all these kittens,” Swartzlander says, looking over the dozens of tiny faces peeking out from cages across the nursery, which houses about 100 mewling residents on any given day.

Once weaned from bottle feeding at about five to six weeks, the kittens are still in critical need, as Destiny Haney, NKLA coalition coordinator, explained. That’s when foster homes become part of the solution.

“As kittens get older, they need play and socialization time. Foster homes are incredibly important, because that’s where kittens learn how to be around people and get used to things like vacuum cleaners and dishwashers,” Haney says. “It’s great if there are cat-friendly dogs and kids in the home, too, as it helps these kittens become sweet, confident, and highly adoptable.”

The foster period typically lasts a short two to three weeks, as the kittens are returned at two months old to be showcased for adoption at the center. All potential fosters need is a room (even a bathroom will do) and the ability to feed and interact with the cats several times a day. Best Friends supplies the food and any necessary medical care.

NKLA (No Kill Los Angeles) is a coalition of animal welfare organizations, city shelters and passionate individuals, led by Best Friends Animal Society. NKLA is dedicated to ending the killing of healthy and treatable pets in L.A. shelters by providing spay/neuter services where they are needed most so fewer animals go into shelters, and increasing adoptions through the combined efforts of the NKLA coalition so more animals come out of the shelters and go into new homes. In 2012, the coalition’s first year of existence, L.A. shelter deaths decreased 12 months in a row, culminating in 4,200 fewer animals killed than in the year prior. Also in 2012, the NKLA Coalition facilitated 23,421 adoptions and 4,458 spay/neuter surgeries were performed.