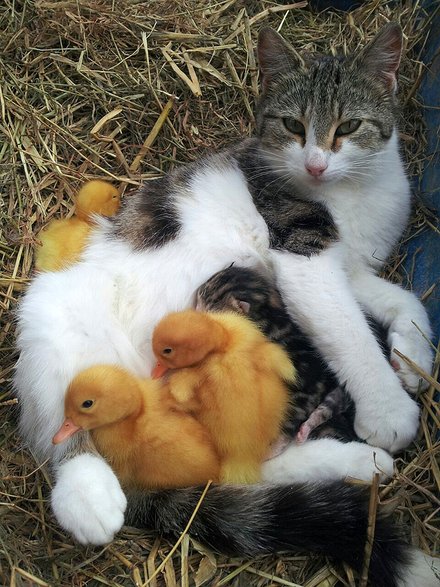 A mama kitty from Clara in County Offaly, Ireland has adopted three ducklings into her litter of three kittens.

Ronan and Emma Lally initially feared the worst when they couldn’t find the ducklings on a recent afternoon, and were completely surprised to discover that, rather than harming them, their cat had adopted the babies into her litter.

When Ronan saw mama kitty with a duckling in her mouth he thought the little bird was in danger, but mama was mothering it, instead. “The minute the cat lay down the three ducklings ran underneath her; she started to purr,” Ronan told the Irish Independent. “We lifted her up and two ducklings were latched onto the cat. The cat has all the maternal instinct, she has her paw around them and it is just extraordinary.”

The Lallys and others who’ve visited them say the ducklings are actually suckling from the mama cat, although when water and bird food are placed nearby the ducklings immediately get up and hop into the water.

Ronan said he initially planned to place the ducklings under an infrared light but will allow the ducklings to be warmed and mothered by the cat. He plans to keep a close watch on the ducklings as they grow, for their safety.  “ The cat might notice when the yellow kittens get very big,” he laughed.