Al Chernoff is the well known Alley Cat of Rescue Ink fame. He lives in Philadelphia, where he continues his rescue work.

The Fire that Saved a Kitty

The best thing in life for Desmal, a sweet cat, was surviving and escaping a house fire.

I am a “cat guy” right now living with my 8 rescues.  I’m also one of the guys from Rescue Ink.  They seem to call me “Alley Cat”.  About a year ago I received a call from a local group, Red Paw Emergency Relief Team, the Red Cross of animal rescue in Philadelphia.  They had rescued a cat from a house fire; she escaped the fire and after an hour or so running and hiding out on the street a firefighter grabbed her.  I offered to foster until she could go back home.

Red Paw dropped her off to my house.  I checked her out and she had fleas and ear mites, she was very underweight and filthy, and her face was burned from the fire. I had Red Paw call the Red Cross Shelter for more information.  She had been adopted 10 years earliero and never saw a veterinarian.  In addition to her neglect issues, Desmal also tested positive for Fiv.  My girlfriend Shelli, who manages a local cage free cat shelter called Kitty Cottage, helped me and we treated Desmal for her fleas, worms, and ear mites along with a really big, dead insect that was found inside her ear.

Desmal took to living in a back room in my house and she started gaining weight.  At the vets office it was determined that her teeth were in terrible condition and she needed several removed.  With a chip in, we raised most of the money for her extensive dental work.

Red Paw was able to contact the family to find out when she could go home.  I was pretty worried about her, as I became attached during these couple months and knew she was pretty neglected.  The family informed Red Paw to just “put her down, we don’t want her anyway.”

Well, Desmal was not put down and she has a home. … with us!  She lives in my family room area with Katie, who has heart disease, and the two cats have become pals. Desmal purrs all day long and is truly a happy, lucky kitty.

She loves to play with her toys, every meal time she runs one full lap around the family room as fast as she can before she gets to her food bowl,  and she is just a joyful, loving, lucky kitty.

For more on Red Paw Emergency Relief Team at our site, including video of the amazing story of Princess and her kittens who were reunited after two separate rescue calls, click HERE.

Al Chernoff maintains both a personal profile and a public page at Facebook.

Website for Rescue Ink. At the Rescue Ink Shelter in Long Island New York the cat room is named The Alley Cat Room. 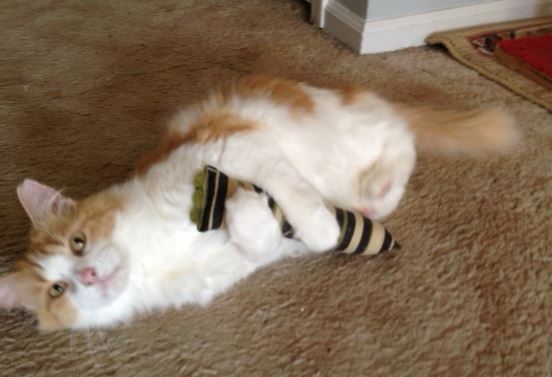