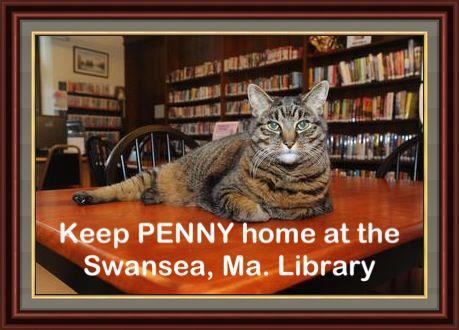 Patrick Higgins has the Swansea, Ma Public Library in his crosshairs and, in a low move, is threatening to make the library get rid of a sweet cat who has called the library home for 14 years.

Higgins is demanding that a handicapped ramp be installed at the front entrance to the historic library building, wants a white picket fence out back torn down, and issued a threat to the library about Penny, saying they have until this Friday to get rid of her or he will file a complaint with the US Department of Justice Civil Rights Division. Higgins is using the ADA (American Disabilities act) in his assault on the library and on poor Penny.

Local residents are perplexed at why an innocent cat would be gone after in this fashion. One allergy sufferer tells Channel 7 news she had never been bothered by Penny’s presence. Swansea resident Linda Rapoza was on hand while the news crew visited and said, “A little cat is being used as a sacrificial lamb.”

Sometimes it only takes one troublemaker to ruin everything. We hope Penny – and library and shop cats everywhere – will be allowed to remain in place.

Anyone interested in showing support for Penny can post at the Swansea Free Public Library Facebook page. Your message will not post at the main wall, but will be seen in the Recent Posts by Others section and view.

In a breaking update to the story, Patrick Higgins has issued a press release today wherein he states that he will allow Penny to keep her home if all of his other demands are met, including the demand that Penny not be replaced after she passes away. Note that he refers to the show of support for Penny as being ‘excessive’.

.
P O BOX 483
SWANSEA MA 02777
774-294-6097
March 28, 2013
PRESS RELEASE
FOR IMMEDIATE RELEASE
AFTER SEEING THE EXCESSIVE SHOW OF SUPPORT FOR PENNY, THE SWANSEA PUBLIC LIBRARY CAT, I HAVE DECIDED TO WITHDRAW MY COMPLAINT THAT PENNY BE REMOVED FROM THE SWANSEA PUBLIC LIBRARY ON THE FOLLOWING CONDITIONS:
1. ALLERGY WARNING SIGNS ARE POSTED AT ALL ENTRANCES WARNING PEOPLE WHO COME INTO THE LIBRARY OF THE PRESCENSE OF THE CAT. This sign can be as simple as “protected by Penny, Our house cat”
2. The Swansea Board of Health issue a permit to the Library allowing the cat to remain at the library and certify that in the opinion of the Board of Health, there are no health issues with her living at the library and that the continued presence of the litter box is not a health hazard to anyone who is using or working at the Swansea Public Library.
3. When Penny dies, she is NOT replaced by another cat.
4. The Fence blocking the wheelchair entrance to the gazebo in back of the library is removed forthwith.

A Patrick Higgins: Stop the removal of Penny the cat from the Swansea Library petition has been set up at Change.org. 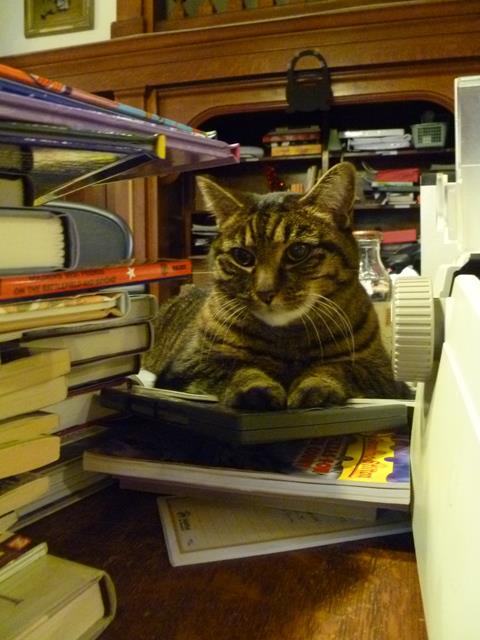