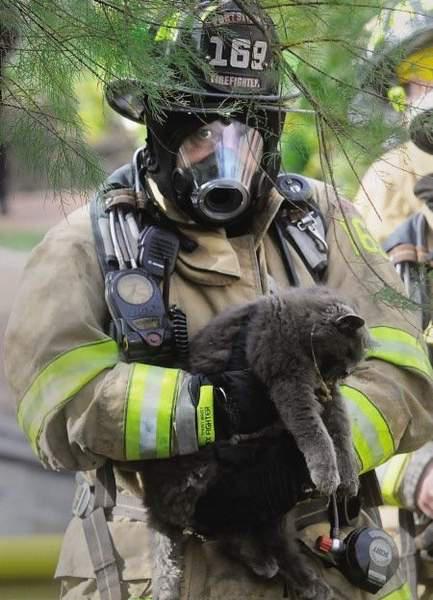 Seventeen year old Tiki Bear the cat was alone and trapped inside the basement when her historic 1742 Portsmouth, NH home caught fire on Tuesday. A neighbor entered the home of Deborah and David Adams but was driven back out by the fire. When firefighters arrived they entered and brought Tiki from the burning home. Tiki was motionless when laid on the ground, and a TV reporter cried watching firefighters administer oxygen to the cat through a pet sized mask. Tiki was revived and taken to Veterinary Emergency, Critical Care & Referral Center of NH, where she was placed into intensive care to be treated for smoke inhalation.

A Help Tiki Bear Facebook page was quickly set up to share Tiki’s story and progress, and to raise funds for her care. A post at the page yesterday said she was very sick, and the bill for her care was already estimated at several thousand dollars. Tiki was not very alert when family members Debby and David Adams visited her on Tuesday.

Tiki spent Tuesday night in a 38% oxygen chamber, laying on a heated pad and covered with warm blankets. Wednesday morning she “took interest in her surroundings,”  according to a report from the hospital. According to the Facebook page, today “Tiki is on IV fluids, and has damage to her eye and throat, but is now breathing on her own and receiving albuterol for her lungs. Really, it’s quite a turnaround from last night and we are feeling more hopeful. Her vet bill is currently at $2,500 and she is receiving great care.”

By Wednesday afternoon, Tiki was doing better, purring for a family member, and had eaten some of the food offered to her. The second video below was taken by veterinary staff today and shows Tiki up and alert, and eating.

David Adams is a historic preservation contractor, and restored his family’s home over the course of the many years they’ve lived there. The house was an outstanding example of Early American architecture, and was photographed several times a day by visitors to Portsmouth. The fire is thought to have started near a first floor fireplace. Assistant Fire Chief Steve Achilles said today that improper disposal of flammable materials in or near the fireplace caused the fire.

Firefighters from Portsmouth, Rye, Greenland, Dover and Kittery, Maine, and other communities responded to the fire.

The Adams’ daughter Lexi set up the Facebook page and arranged for online donations to the fund for Tiki’s care. Tiki is  a valued family member, who has been with her family since birth, and whose mother was the family’s cat.

Portsmouth, NH firefighters Mark Herrholz, left, and Tim Dame, carry Tiki Bear to a police cruiser for transport to an animal hospital after rescuing her from Tuesday’s house fire and reviving her with oxygen at the scene.

Tiki at the veterinary hospital on Wednesday.

Help Tiki Bear donations are being accepted through PayPal HERE.

Otherwise, donations for Tiki Adams can be made directly, to: