Staff at the Winona Area Humane Society in Winona, MN managed to unglue Gumby’s leg, which was twisted and glued to his spine. The kitten was rescued on Saturday and is already up and walking again. 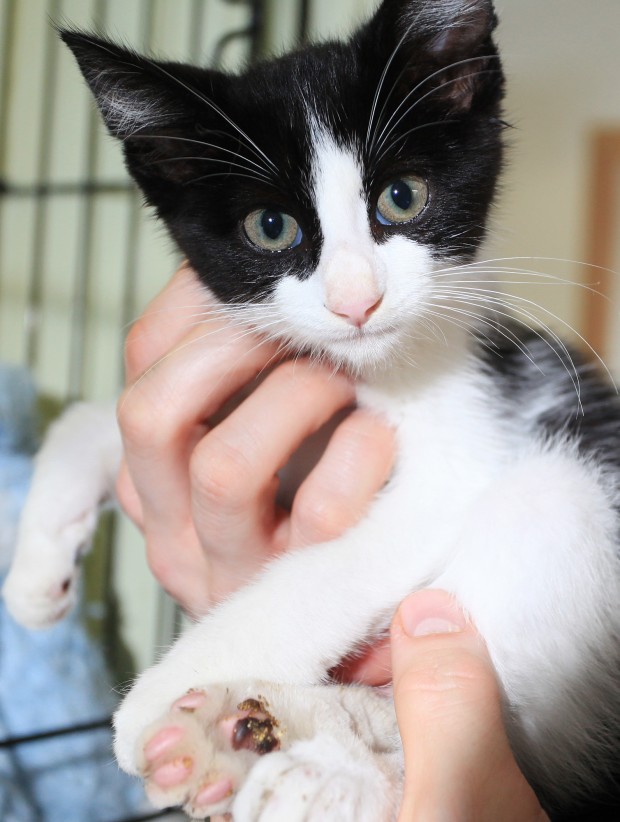 A Winona resident heard meowing Saturday night and found a tiny kitten with its leg attached to its back. Animal Control officer Aditi Terpstra responded to an injured animal call and discovered a 7 to 9 week old kitten with one hind leg twisted upside down and attached to its spine near the shoulder, with the paw pointed upwards.

Officer Terpstra took the kitten to the humane sociery, where it was made comfortable for the night. Winona Area Humane Society medical director Deborah Stowe and local veterinarian Jan Doelle set to work on Sunday morning trying to release the kitten’s leg. The gave the kitten painkillers, then tried alcohol and acetone based solvents on what they think was an industrial-strength adhesive. When the solvents didn’t work they trimmed the fur, using shavers and scissors, which got bogged down in the adhesive.

When the kitten’s leg was finally freed from its back, x-rays found, to the rescuers’ surprise, that there were no broken bones. The kitten is now called Gumby in a nod to his pliable leg that bent but did not break.

Dr. Doelle thinks Gumby may have some residual nerve damage, but he is expected to have full use of his leg for walking and playing soon. On Monday he was walking with a limp and dragging his left hind leg behind him.

The Humane Society has an open investigation but slight hopes of finding and charging the abuser or abusers unless someone comes forward with information.

Meanwhile, thanks to everyone from the concerned resident who heard Gumby’s cries, to the animal officer, to the shelter staff and the outside vet, Gumby was rescued and helped. Fortunately, he was helped in time for his leg to be saved.

Gumby was found near Winona State University. Anyone with information, who either recognizes him or knows who abused him, can contact the Winona Area Humane Society at 507-452-3135 or  [email protected].