For the first time in his life, Milo Harris cried tears of joy when he was reunited with his missing cat Bootsie on Friday. Boostie had been missing since the Joplin, MO tornado of May 22, 2011. 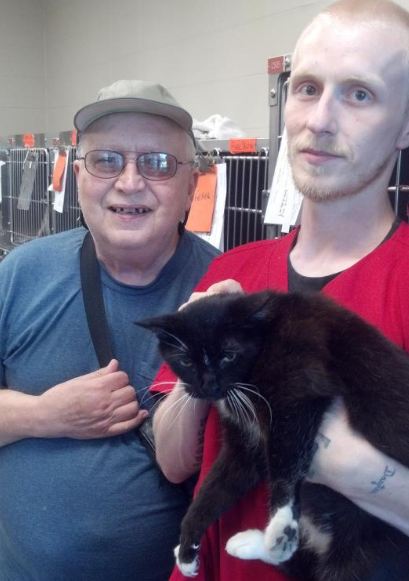 Bootsie was bought in to the Joplin Humane Society Animal Adoption & Resource Center on Friday by animal control. He was still wearing his collar and tags but was feeling cranky and didn’t want to cooperate with staffers as they tried to check his ID number.

Once Bootsie was identified, the AARC contacted his owner, Milo Harris, who was shocked and overjoyed, not only that Bootsie was safe and had been rescued, but that he still had his collar and tags on.

Bootsie appears to be in good shape, so shelter staff think he may have been living in someone’s shed but wouldn’t let anyone get close to him to read his tags.  He is thought to have been scared and unfriendly while living in the traumatic aftermath of the tornado.

The shelter is taking the occasion of Bootsie resurfacing 13 months after he went missing in the devastating tornado as a reminder to us all to think “lost” instead of “stray” when he see cats in odd places, or hanging around. They say at their Facebook page, “When animals get lost, they can start to look dirty and uncared for quickly. Alert shelters, veterinarians, Craigslist, and local newspapers to try to first reunite people with their missing pets.”

The shelter also reminds us that tags are our pet’s ticket home, and asks that with the 4th of July holidays upon us, when many animals panic and get lost, we make sure our pets have ID.

A local news crew met up with Milo and Bootsie at the shelter on Friday.