FDNY station house cat Carlow was rescued by the crew at the firehouse he now calls home. A search was mounted when he went missing Saturday night, and a neighbor returned him on Tuesday after seeing a missing poster. 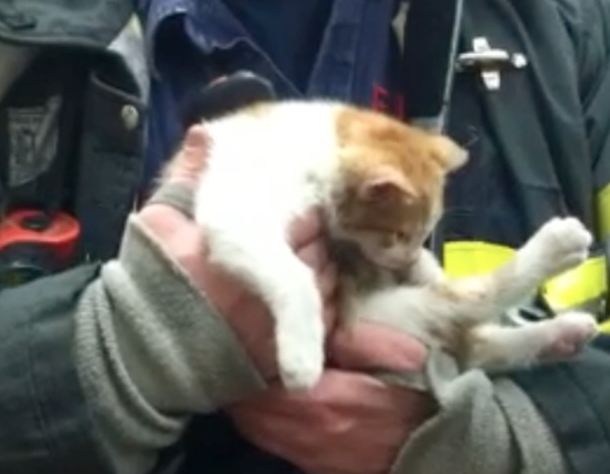 Carlow is the station cat at FDNY Engine 22 Ladder 13 house on East 85th Street in Manhattan. Carlow was a small, dirty, hungry kitten when rescued by the crewa while back when they were out on a call.

The firehouse had previously had a resident cat that passed away after many years, so Carlow moved in as the new cat in residence. Carlow is thought to have been spooked and run out the door when the crew went on a call last Saturday night.

Local coverage in Gothamist and DNAinfo.com, combined with assistance from Anjellicle Cats Rescue, brought the missing cat and his firehouse family’s search widespread attention. A neighbor found Carlow in a box and contacted the firehouse when she recognized him from the posters placed around the neighborhood. Anjellicle created missing cat posters when he got lost, and volunteers Astrid S. and Barbara L. posted them all over the Upper East Side. They also spent hours of searching for Carlow, who was returned thanks to their efforts and the decency of the woman who found him.

You can see a slideshow of Carlow and his firefighters. (If the slideshow comes up without arrows, click on the photos to advance them.)

This video shows Carlow with his caregivers just after he was rescued by them. The firefighters took him to Petco, where Anjellicle Cat Rescue sets up on weekends, to be checked out.