Little Harry Potter was found in a garbage truck, soaked in turpentine, with his tail singed. He was taken to high-kill Hamilton Animal Control, which called a rescuer to take him.  Now he is safe but questions remain. 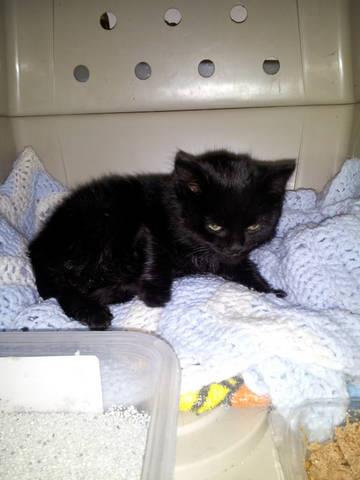 Sead Nujknovic found a tiny kitten soaked in turpentine and with part of his tailburnt off in the back of a City of Hamilton, Ontario garbage truck when it went in for repairs last Thursday. The kitten was turned over to the notoriously high-kill Hamilton Animal Control (HAC) shelter. Fortunately, Harry Potter’s story does not end there.

A staffer called rescuer Karen Beharrell of Special Ones Cat Rescue. Karen brought Harry Potter home and cleaned him up. Dr. Debbie Beach has examined Harry Potter, and says he is doing well. The greatest long term concern for his health is whether the flammable fluid has poisoned his liver and kidneys.

Please click the link for a video report on Harry Potter. We get to see the sweet little furball now that he’s been cleaned up and cared for. Video: Cat recovering after having part of tail burnt off.

Harry Potter has already survived danger three times in his short life:  the dousing and attempted burning, ending up in a giant garbage truck, and ending up at an animal control facility known for URI and its high kill rate.  Thanks to the women of Special Ones Cat Rescue, he is safe and loved.

Another issue remains; why wasn’t Harry’s abuse reported by HAC to the OSPCA? Though separate entities, the two share a building. Harry’s rescuers wondered why the report had not been made as soon as the kitten arrived. We learned today that no one is investigating the abuse case. We are told that the OSPCA says since the rescue has the kitten they can’t investigate. Some are not satisfied that the inquiry ends there, before it is even begun.

Harry Potters rescuers will make sure that he has a good life from now on; he can leave danger and abuse behind him and move on.