Sweet Libby was rescued after being abandoned and then trapped in a culvert drain. The frightened, emaciated cat proved herself to be sweet, trusting and friendly shortly after her ordeal. She is being cared for by the BC SPCA, which is seeking information on the person responsible for Libby’s suffering. 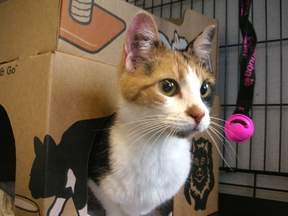 The BC SPCA Squamish Branch is seeking the public’s help in finding the individual responsible for barricading a three-year-old tortoiseshell cat in a culvert across from the Squamish landfill. The cat was trapped in a five-foot pipe about eight inches in diameter that runs underneath a pathway.

“We received an urgent call from a District of Squamish employee who happened to be in the area and noticed that the culvert had been deliberately blocked off with wood, bark and rocks,” says Marika Donnelly, supervisor of the Squamish SPCA. “Inside was the terrified cat.”

The SPCA immediately set a live trap at the edge of the culvert and within hours “Libby” as she is now known, was in SPCA care.

“She was extremely frightened and stressed, but once we took her into care her demeanor totally changed – she is friendly and loving and seemed so grateful to see friendly faces,” says Donnelly. Libby was placed under veterinary care, where she received fluids for dehydration and was given heating pads to increase her body heat.

“We suspect that she may have been abandoned in the densely wooded area for some time before she was discovered because she has severe hair loss on 60 per cent of her body and is covered in scabs and open wounds.” Donnelly notes that Libby is also emaciated – rating only 1.5 on the body conditioning score, a standard measurement used by veterinarians (one being emaciated and nine being obese).

“We are so glad that she is now in care and getting the treatment she needs and deserves,” says Donnelly. “She has a wonderful, feisty attitude and a ravenous appetite so we are hopeful that she will make a full recovery and that someone will come forward to offer her a home. I am just baffled as to why anyone would deliberately leave a beautiful cat to die like that.”

Anyone with information about Libby or who may have trapped her in the culvert is asked to please call the Squamish SPCA at 604-898-9890. The Squamish SPCA would also be grateful for any donations for Libby’s ongoing care and for other animals in need.

The BC SPCA is a non-profit organization funded primarily by public donations. Its mission is to prevent cruelty and to promote the welfare of animals through a wide range of services, including cruelty investigations, emergency rescue and treatment, sheltering and adoption of homeless and abused animals, humane education, advocacy, farm animal welfare, spay/neuter programs, and wildlife rescue and rehabilitation.