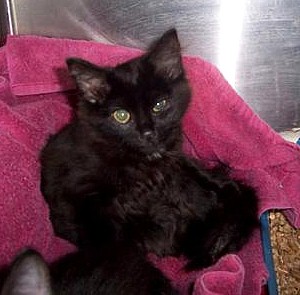 Chassidy came to the Abbotsford BC SPCA last week, injured with a badly broken leg and sick with a respiratory infection. The 10 week old black kitten had been hit by a car and a back leg was injured so badly the shelter scheduled amputation surgery for next week. In the meanwhile, Chassidy was placed on antibiotics and pain medication.

Someone took Chassidy from the shelter sick room on Wednesday while staff were busy in another part of the building. Given the kitten’s illness and severe injury, staff were particularly upset to find that she had been stolen. A story on the incident in a local paper on Thursday included a plea from shelter director Jodi Dunlop asking for the kitten’s return along with a promise that the shelter would not press charges.

On Friday morning Chassidy was discovered in a crate outside the shelter. She was cold and wet but otherwise unharmed. Shelter staff are overjoyed to have her safely back and said she would recover from the effects of her time spent outside waiting for shelter staff to find her.