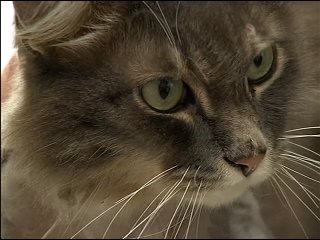 Rascal’s family was stunned to find their cat, missing since the April 27 tornado that destroyed their home, sitting under their truck and looking much the worse for wear on July 11, 75 days later.

Rascal’s family lost their home and practically everything else in the tornado that swept through Concord, Alabama last April and did not ever expect to see their missing cat again. Petmom Laura Ogden says “We just kind of figured he didn’t make it, because he was in that end of the house that was totally destroyed.”  The Ogdens were amazed, though, early last week when a much thinner, injured and bedraggled version of Rascal turned up sitting under the family’s truck.

The 9 1/2 pound cat had shrunk to 2 pounds and his collar had become tangled around a leg, causing serious damage.  The vet removed the collar and reconstructed the damaged tissue area on the leg and Rascal is expected to recover fully.

As we have read and heard many times, when a family loses everything and finds a missing pet it makes a world of difference and helps them to move forward and get on with things. Ms. Ogden says of Rascal’s return “Everybody’s back together now and we can concentrate on putting our lives back together.”