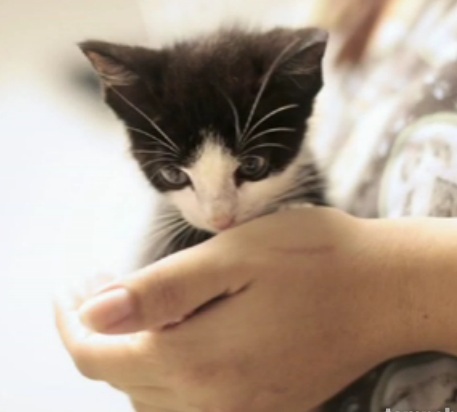 A TV reporter visits Dexter and his vet tech caretaker Tiffany Sroka at her home, where we learn about his progress and see him scamper around, just being himself. Also, Petluv gives more info, and the petition for rigorous prosecution of his attacker is still open for signatures. As Dexter makes great improvement, a TV crew is allowed to visit him and PetLuv Clinic staffer Tiffany at her home, where he is receiving care and learning to live the good life when not at the clinic. Tiffany says Dexter has gained some vision in recent days and has grown and changed in the two-plus weeks since he was rescued from a very bad situation by a good and decent group of youngsters.

Without further ado, here they are:

Meanwhile, PetLuv continues to document Dexter’s progress on their Facebook Page, and has clarified some points for the many supporters and well wishers who have asked about him. They say that while Dexter has made remarkable progress it is still possible for him to relapse. He continues to take anti-seizure medication and will do so for some time longer. Her cannot accept visitors, and is still a critical care patient.

Donations made to PetLuv Spay and Neuter Clinic for his care are put in a special fund dedicated to that purpose, and donations can be made at the clinic’s Donations Page using PayPal.

Several people have wondered if Dexter closes his eyes, and the answer is yes, he does, and he sleeps with them closed.

Regarding when and whether Dexter will be made available for adoption, the clinic says they will not make any decisions about his future for at least several months, giving him time to heal, and they are not taking names of potential adopters. If Dexter does become ready to go to a forever home they will consider adopters at that time.

The clinic says they expect Dexter to remain both physically and emotionally fragile going forward. Of everything we’ve learned about Dexter’s assault, his condition afterward and his progress since, this seems the most affecting and poignant of all.

As PetLuv says of Dexter, “he will likely remain physically and emotionally fragile”.

What of his attacker, though, who we presume to remain tough? Wilana Frazier is charged with animal cruelty and contributing to the delinquency of a minor, and is free on $3,500 bail.

The Care2 petition asking for rigorous prosecution of Wilana Frazier currently has close to 29,000 signatures. The goal is 100,000 signatures. For more on the petition and a link to the petition site page you can visit Justice For Dexter Kitten: Care2 Petition Asks Maximum Prosecution For Attacker. It is possible under Florida law to charge and punish her abominable actions seriously; animals lovers and those appalled by her savagery are asking the court to do so.

Of course, no punishment will ever undo what she and her to young boys have done, and it took a dreadful act for little Dexter kitten to receive the tender loving cars that any and every kitten deserves.

Another recent video showing Dexter getting around and discussing his condition:

Original story on Dexter in the aftermath of his attack: