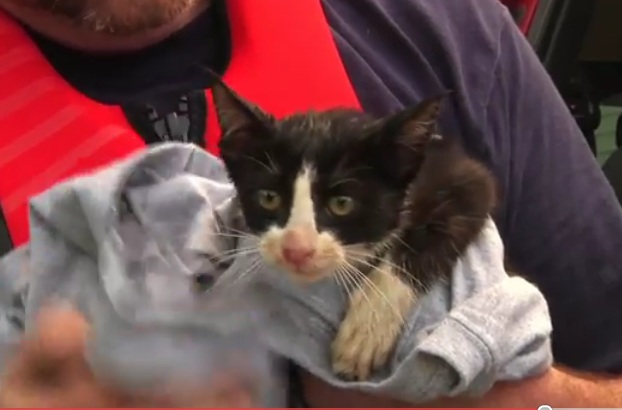 Lucky and his rescuer share a moment after the cat was brought down from a rooftop where he sought refuge from flood waters in Minot ND. Other cats have been spotted in trees. The Souris River, known locally as the Mouse River, has flooded at Minot ND, sending residents fleeing from their homes, causing 500 pets to be brought by their families to an emergency shelter, and stranding a  number of cats in trees and on rooftops. Cats, many of whom are thought to be feral, have been seen jumping from tree to tree as their once familiar landscape has drastically changed and become inhospitable, at least until the waters recede. Local animal lovers became concerned and banded together for support and to make some noise when flood area footage and first-person reports made the matter known, and after seeing images like the one above. This is the cat originally expected to be rescued.

The kitten in the pics and video was rescued from a rooftop yesterday by National Guard personnel who could see that the little fellow did not look able to fend for himself like some of the other cats seemed able to do. The rescued kitten is not the cat who many had seen pictures of and who was expected to be rescued, but the saved cat now called “Lucky” is considered by all to be the more vulnerable feline.

Those animal lovers who have helped make the stranded cats an issue of local note remain concerned and are looking for ways to help them.

Here’s the story of the rescue of that one cat we mentioned above. Lucky: The saved kitty from the flooded Magic City.

The many other cats displaced or endangered by the  flooding all deserve their own rescue story, too; but we don’t yet know whether they will be caaught and brought to land or will have to wait for flood waters to recede.