A Fort Walton Beach, FL woman has finally found her missing cat, who was given away or dumped without her knowledge or permission. 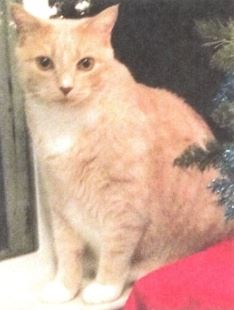 Alex McAllaster returned from a six week sailing trip at the beginning of June to find that her beloved 8 year old special needs cat Dante was gone. When her roommate was unhelpful and reluctant to talk about Dante, Alex called the police. The roommate told officers that she had given Dante away to someone in a Sam’s Club parking lot about two weeks earlier, in May.

Alex mounted a search, put up flyers, posted online and got her story out in the local paper, asking anyone with information on Dante’s whereabouts to call her. She desperately wanted to get her cat back, and she was concerned for his health. Dante has bladder issues which require that he eat wet instead of dry food.

Alex was quoted in the Daily News saying “You could have burned the house down, I wouldn’t have cared,” she said. “But you screwed with my cat.”

Alex received many emails, calls and texts with tips, and she followed up on each one, she said. One of those tips finally panned out when she found Dante late last Saturday night.

Alex told about finding Dante in a followup story at the Daily News on Wednesday.

A woman called at 8pm on Saturday to say she’d seen Dante in a drainage ditch in front of the Walmart and she’d spoken to employees at a nearby auto parts store about him.

Alex had already checked that spot several times, but she went again with a friend later that night.

“It was midnight, pitch dark, and I saw his little shadow of a body just sitting there,” she said. “I stopped, squatted down and said his name, ‘Dante.’ He started meowing.

Dante lost about half his body weight during the time he was missing, going from 16 pounds down to 8. He suffered liver damage from the rapid and extreme weight loss but his vet says he will recover.

“He’s dirty, but he’s alive,” she said. “I’m so grateful to the community. I prayed every day and I just kept calling him home.

“It’s a miracle that I found him.”

Some readers may recall a similar story from earlier this year, Bronx Woman Searches for Missing Cats Dumped by Petsitter. Jennifer Ingber’s trusted petsitter dumped her two cats while she was away. Jennifer mounted an all-out search, and found both cats herself after several weeks. 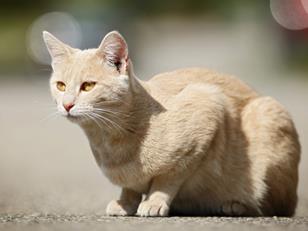