A missing cat has been reunited with her family thanks to search volunteers and a caring trucking company.

Oreo slipped out of her leash and harness and ran off into the woods in White River, Ontario, Canada during a stop on a move with her family from Nova Scotia to Red Deer, Alberta at the beginning of September.

Kelly Graves, her eight-year-old son Ryan and her boyfriend David Morrison were unable to stop Oreo when she slipped her harness, and  watched as she took off into the woods. The family called and searched for their cat but eventually had to leave the area and complete the long journey to their new home.

“We searched for hours in the woods trying to find her and no luck,” David said.

“But eventually we did have to leave.”

Kelly put out the word on her missing 5 year old cat with White River area residents and left the area knowing that concerned animal lovers would continue the search in her absence. That search paid off after a couple of weeks when a woman successfully trapped Oreo.

The plan to get Oreo back to her family took form as trucker Brian McHale, who hauls for Bison Transport and frequents the local doughnut shop in White River, offered to take Oreo with him on a run to Winnipeg.

Bison Transport is based in Winnipeg and the dispatcher there took on the task of finding a driver to take Oreo on the next leg of her journey to her new home.

Driver Bruce Kaplar was heading to Calgary and agreed to deliver the little passenger to her waiting family.

“They asked me if I want to do Calgary and I said sure. They said ‘Only thing is you have a passenger,’ ” Bruce said. “I never hauled a cat before.

“To help somebody out, I’m okay with it … it’s well worthwhile. The cat’s home where she belongs and with the people she belongs to.”

Bruce and Oreo met up with Kally and her son Ryan at the Bison facility in Calgary on Friday, and a tearful, happy reunion took place there.

Kelly said she was surprised when she learned that Oreo had a ride and would be back with her only a couple of days after being found.

“I thought I’d never see her again … I figured she was gone, but I still never gave up,” Kelly said.

Doug Romanuk, Bison’s western region vice-president of sales and operations, was on hand for the reunion and said:“We take great pride in our culture of care (and) we’re very proud of our two drivers Brian and Bruce.”

The photos below show scenes from Friday’s happy reunion. 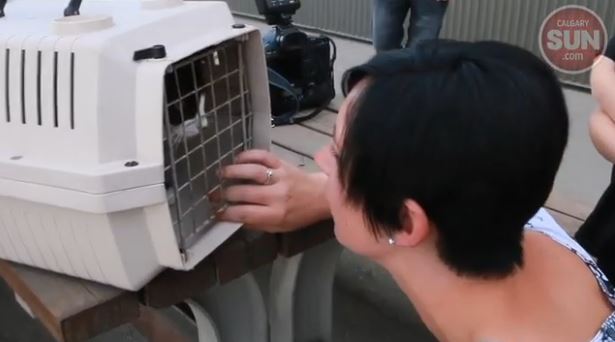 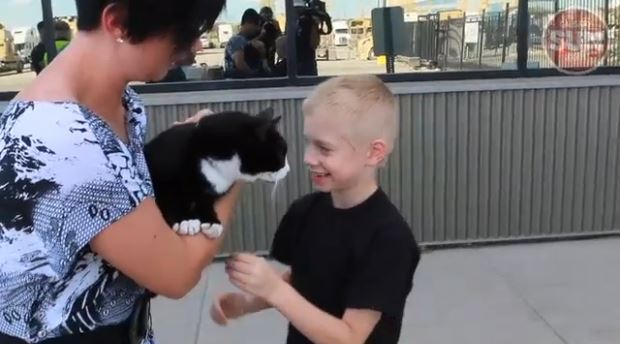