.
Trucker touched thousands of hearts when a photo of the heavily bandaged orange kitten was circulated online recently.

Trucker was rescued by a Good Samaritan truck driver who witnessed him being thrown from a moving car in Southern Indiana  last month.  The truck driver picked up the injured three month old kitten, whose front leg had been torn off upon impact, and tried to find someone to help him. Not wanting to let the kitten be put down, the driver persisted after being told at a veterinary hospital that the injured creature should be euthanized. Fortunately, someone from the Kentucky Humane Society happened to be at the public shelter when the driver was there with the kitten, and they offered to take him and give him a chance.

Now, two and a half weeks after his rescue, Trucker is healing and leading the life of a normal kitten, to a degree. While he eats, sleeps and plays, and is happy, Trucker is on cage rest so that his pelvis can heal. Trucker’s caregivers say it will take time before they know whether nerve damage will affect his rectum and tail.  Trucker’s caregivers say he is happy to be loved.

KHS told Trucker’s story in their blog. Here is part of that story:

.On July 16, A small black sedan with blacked out windows sped down Highway 265 near the Grant Line Road exit in Indiana. As the car raced down the highway, the driver carelessly tossed a small orange kitten out the window. A truck driver saw what had happened, stopped his truck on the side of the road and raced back to find the kitten. The kitten was a terrible mess. One of his legs had been torn from its little body, and his little face was covered in road rash. The truck driver looked for the missing limb, but it was nowhere to be found. The poor helpless kitten looked at the truck driver and meowed plaintively. The Good Samaritan knew he had to do something.

The first animal hospital looked at the poor creature and suggested euthanasia, but the truck driver wasn’t ready to give up on this small kitten, clinging to life and looking at him with trusting eyes. He took the orange kitty to Louisville Metro Animal Services (LMAS), the city’s public animal shelter. Employees said they would report the incident to Indiana police. A representative from the Kentucky Humane Society (KHS) was at LMAS when the truck driver came in. She knew the situation was grim, but asked the man if KHS could have a chance to help the little orange ball of fluff. The truck driver gratefully agreed.

The Kentucky Humane Society took charge of this poor animal and rushed to stabilize him at a local veterinary hospital. Once stable, the little three-month-old kitten, now named Trucker after the man who saved him, had the remainder of his leg amputated to prevent infection and aid in the healing process. Though purring and eating hungrily, Trucker could not stand on his own, and needed further x-rays and diagnostics to determine what else was going on.

KHS has continued to add updates on Trucker, both at the blog page and at Facebook.

The Kentucky Humane Society turned to their Help Me Heal fund to help Trucker with his medical needs, and has been accepting donations to replenish the fund so they can continue to save more lives.

Here is trucker up and eating in his cage on July 29: 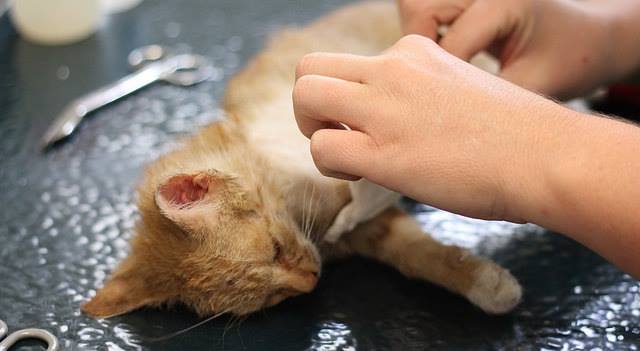 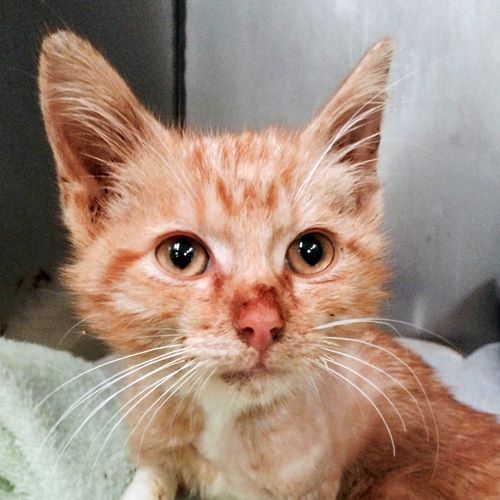