Special needs kitty Tashi has become very well known since he was found as a kitten 3 years ago.  Many good hearted people have helped in those three years and now he has gone to his forever home. 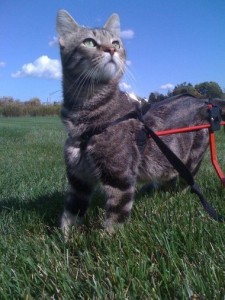 Tashi was all alone, injured, crippled and in pain when he was found as a kitten at a cat colony in Columbus, Ohio early  in 2009.  What was first thought to be a neurological condition was discovered result from a broken back, which left Tashi dragging his hind legs. It is not known how he came to be that way. Local rescuers took Tashi on as a case of special interest, and had him transported to Tabby’s Place cat sanctuary, in Ringoes, New Jersey, where he lived a good life and received beneficial physical therapy and wheels. Tashi has been the subject of news reports, and has been featured a few times on the Best Friends website.

Last month, Tashi entered a new phase in his life when he was adopted, along with fellow Tabby’s Place special needs resident Gabriella, who is a CH (cerebellar hypoplasia) kitty. Pennsylvania resident Rori Weidner came to Tabby’s Place after losing a special needs kitty, looking to give another special cat a home. She was smitten with both cats, and adopted the pair of them. Rori reports that both cats are doing well in their new forever home.

Below are videos of Tashi that show his progress and, in the last one, show him as a happy, curious cat. The last video gives a look at Gabby from her sanctuary days. Tashi, February 2009. Tashi’s introductory video, where he is shown taking early steps with the help of his physical therapy sessions.

Tashi walks for a baby goat. April, 2011. “Apparently baby goats are therapy to Tashi! Look at this boy walk!!!”