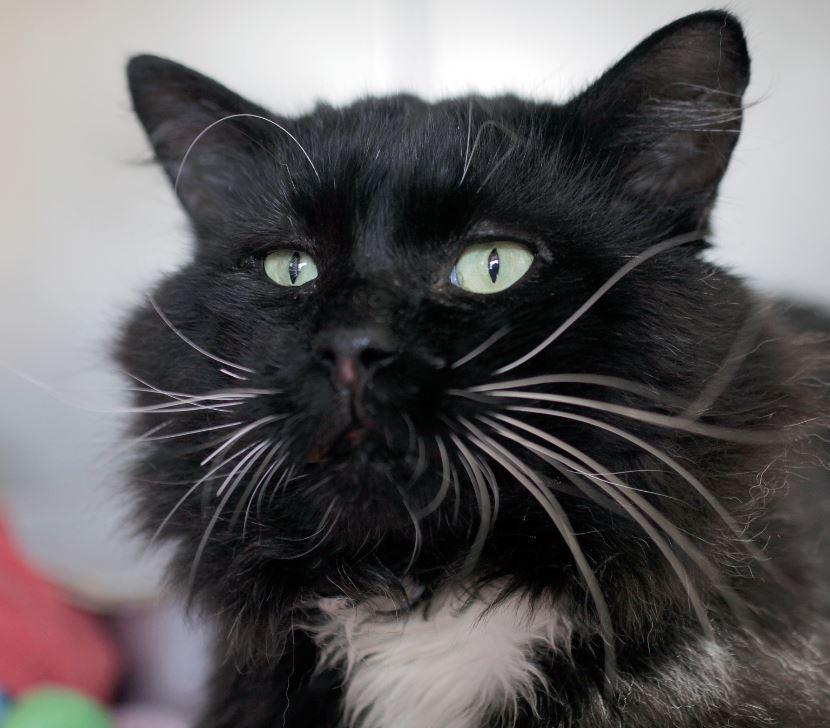 A Maine cat is recovering after being shot by a police officer who mistakenly thought he was rabid, and the woman who has been feeding him and got him medical care will give him a home.

A Gorham, Maine police officer shot Clark Kent after being called in to help an animal control officer who’d gotten a report that the neighborhood stray had attacked a 7 year old child on August 20. When the animal control officer was unable to catch the cat, who was thought to be rabid, the officer was brought in. Concerned that Clark was rabid and a danger, the officer shot and wounded him. The 7 year old girl’s father called animal control about Clark and was the person who said the cat appeared to be rabid. The man said his daughter had been bitten or scratched by the cat.

Deb Webb has feed Clark Kent from her back deck for three years, and she took the injured cat for medical care.

Clark was found not to have rabies after the 10 day mandatory waiting period and he is recovering from his injuries at the Animal Refuge League, in Westbrook. He was hiding on his own and without treatment for four days before he was found and got help. He is currently being monitored by an othopedic surgeon.

A representative from the ARL says the usual procedure wold have been to trap the cat rather than shoot him.

The Portland Press Herald says in its coverage of the story: “Dr. Sheila Pinette, director of the Maine Center for Disease Control and Prevention, said state law requires animal control officers to capture suspected rabid animals and bring them to a veterinarian or animal shelter to be observed in isolation. But officers can shoot an animal if they believe it is an imminent threat to humans or other animals.”

ARL says this is their first experience with such an incident and they hope it will be the last.

“This is not a typical way for a cat to be brought to us,” said ARL’s Jeana Roth. “We never want to see a situation like this again.”

Deb Webb told the Press Herald: “I had a really hard time wrapping my brain around why this happened and how it happened.”

“I just feel really sad that this innocent, sweet animal was hunted down and shot in a yard where he felt safe.”

Deb will adopt Clark when he is recovered and released. Clark’s caregivers at ARL say he is a “love bug” and he is adjusting well to living inside.

The Gorham Police Department is investigating the shooting and has offered to pay for Clark’s medical bills.
.
The Portland Press Herald made this report on the story:

WMTW also reported on the story: