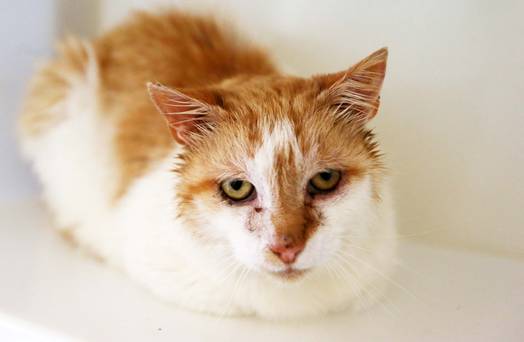 Wolfie the cat had many friends caring for him and greeting him with a smile over the past ten years, while he lived rough and homeless around a shipyard in east Belfast, Northern Ireland. With the years taking their toll, he was transferred to an animal charity and quickly found a home where he can be comfortable from now on.

Wolfie was know by several names – including Sir Gingealot, Pusskins, Aero, Felix, Wolfie and Hope – to those working near or passing a set of office blocks on the Airport Road over the years.

Some workers brought him lunch and others came by with an evening meal for him, and many shared their friendship and made sure he got plenty of attention.

Recently, however, Wolfie started looking poorly and one of his caregivers, Maria McKernan, contacted Assisi Animal Sanctuary to see if they could help. Assisi agreed to take him and Maria left a note in one of his favorite spots thanking everyone who looked out for him over the years after she delivered him to the shelter. She told the Belfast Telegraph she was in tears after leaving him with Assisi.

Wolfie – called so after the Harland and Wolff shipyard near his old turf – was given a vet check at the shelter and was discovered to have FIV, the feline immunodeficiency viral condition. Due to the FIV diagnosis, Assisi felt he needed the right home, where he will be given good care by owners who will provide an environment where he can be healthy and also be on the lookout for any illnesses he may get so he can receive treatment. Assisi feels he can do well with good care.

Once Wolfie’s photo and story were shared at Facebook (see post below) numerous offers came in to rehome him. An adopter was selected and Wolfie will go to his new home on Saturday.

One of his old friends, Stevie Robinson, followed the many comments from Wolfie’s old friends at Facebook and added: “So happy that Sir Gingealot’s story has a happy ending. I was sitting in the rain like a fool crying my eyes out at the message you left on the railings.”

Watch the Belfast Telegraph video with Wolfie and Julie Gilmore from Assisi Animal Sanctuary. Julie talks about Wolfie and his needs, and the adjustment he’ll be making when he moves into his new home: 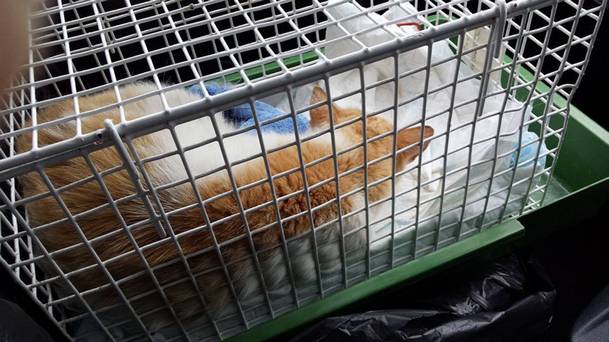 If you read through the comments at Wolfie’s photo at the Assisi Facebook page (found below) you will find several touching messages from those who have cared for and about him over the years.   Some of the comments are also reprinted in the Belfast Telegrph article.

*Wolfie has now been reserved*Meet the cat with multiple names.This is Hope/Pusskins/Aero/Wolfie and this is just…