A cat was treated with a pet oxygen mask at the scene of the fire that killed 1 and displaced 12 more, along with Teri Ensley on Monday. Teri is always helping others, now the community is helping her. 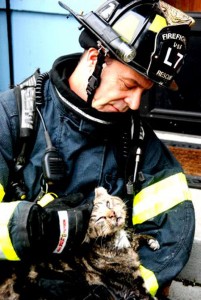 Well known local cat rescuer Teri Ensley, who operates Furry faces Foundation was not at home when fire broke out at her West Seattle WA home on Monday. Firefighters arrived at 10:30 am to find black smoke pouring from a kitchen window of the 1 1/2 story home. While the firefighters were able to extinguish the blaze within minutes, it caused $70,000 in damage, destroyed supplies, and displaced the resident and the group of foster cats staying with her at her home.

Overcome by the smoke, a 16 year old cat named Pouncer died. Terri told the West Seattle Herald that Pouncer showed up at her doorstep 15 years ago. She said, “I know that Pouncer had a good life in my heart,” as she held him in her arms, wrapped in a blanket. “Pouncer was showing his age and he was frail, I know all that but it doesn’t change that I miss him and I love him and he was my friend for fifteen years.”

Another older cat named Jared, who Teri has been preparing to be put up for adoption, was having seizures from smoke inhalation and was treated with a pet oxygen mask at the scene. He was transported to an animal hospital afterward for followup care. The other twelve cats are being cared for by rescue organization Kitty Harbor. Teri is staying with friends.

Teri is well known in her neighborhood for the plant sale fundraisers she holds to benefit her activities helping cats and their families. In addition to fostering and placing cats and working with other area animal welfare groups, she does what she can to help people of limited means care for their pets and keep them in their homes. She hands out food and litter and provides free spay and neuter coupons to those who need them Now that Terris has suffered sich a great and sudden loss, those around her are trying to help get her back on her feet. Sara Riehl from AARF compiled a list of  items needed by Terri at the page linked to here at  West Seattle Blog, which has provided  coverage of the story since they showed up at the scene on Monday morning. There has also been a Facebook page set up to help, Teri’s Fire Fund.