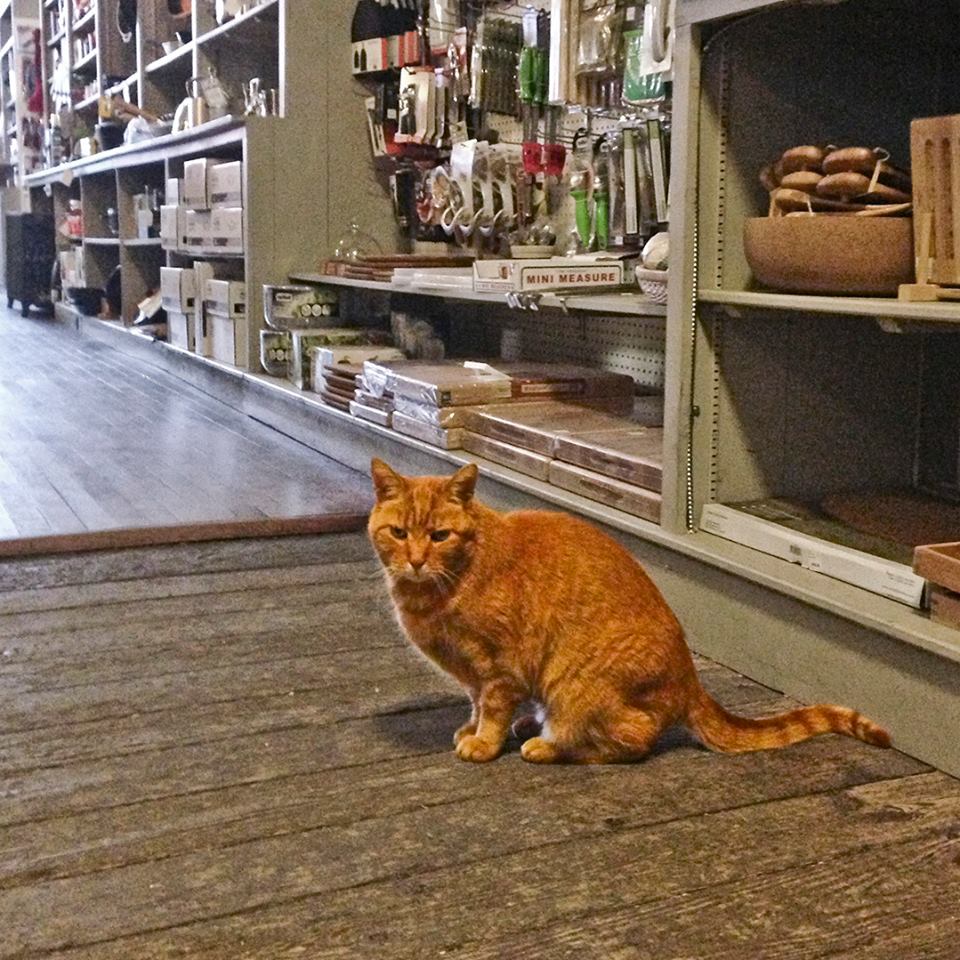 .
Ann Arbor, Michigan residents are saying their fond farewells to a cat who was a fixture of local life for 17 years.

Lewis fit in perfectly when he was adopted by Mark Hodesh as the shop cat at Downtown Home and Garden, where he could be found lounging on his bench or in the merchandise when he was not greeting customers or friends who’d dropped by to see him.

Lewis was about 20 years old when he passed away in recent days. His passing was announced by Downtown Home & Garden at Facebook on December 26.

Lewis, the orange tabby store cat at Downtown Home & Garden, has died peacefully at about 20 years of age. He enjoyed a brilliant career here over seventeen years allowing children to maul him with kisses, and gently taught them when enough is enough. He indulged foolish baby-talk from some adults while keeping a knowing, dignified relationship with others. Lewis particularly enjoyed the hustle of Saturday mornings at the store and patrolling Bill’s Beer Garden on summer evenings. We will remember his punctual early morning greeting at the front door and his mewping of instructions as we followed him to his bowl. He will be missed. A memorial gathering will be convened at the store whenever anyone wants to reminisce.

The announcement of Lewis’ passing has brought more than 250 comments by locals and visitors who have sent their condolences and shared fond memories and photos of the well-known cat who was a friend to so many.

A lengthy feature on Lewis at MLive.com tells more about the celebrity cat’s life.

Lewis’ first known home was with local resident and animal rescue volunteer Maureen Grady. He showed up at Maureen’s home as a stray, who’d perhaps wandered there, or maybe had been dropped off. Maureen and her husband took Lewis in, but he did not get along with their other pets and, after 6 months, she was ready to find him another home.

“He was just fierce,” she said. “He had his own agenda. He was very aggressive. I realized that he needed a different home.”

“I was just devastated. It was really, really hard,” she said.

A friend who worked at Downtown Home & Garden brought Mareen into contact with the store owner and Lewis began his new life.

“It was an immediate fit,” Hodesh said. “He ended up being very friendly to people.”

“A million kids learned how to pet a cat on his head,” said Sarah Kaufmann, a 10-year employee at Home and Garden. “People in their 20s bring in their kids and say ‘My mom used to come bring me to see this cat.’ He was really amazing.”

“He met me at the door every morning,” Mark Hodesh told MLive. “There will never be another cat like Lewis.”

You can read the many comments about Lewis at Facebook HERE.

You can read the full story on Lewis at MLive HERE.