With just days remaining for action in the 2012 session, time is running out for a pair of animal protection bills introduced to the Florida State Legislature by Sen. Mark Fasano. The bills lack House support.

Despite widespread publicity and national support, SB 618, the  “Dexter’s Law” Animal Abuser Registry bill, and SB 288, the “Horatio’s Law” Domestic Violence Against Family Pets bill, both of which passed out of their Senate committees, have failed so far to find support in the House.

Supporters tried unsuccessfully to link the bills, in hopes of streamlining passage, and as of last Friday had still not found a sponsor to champion them in the House.  Effectively speaking, supporters have until the end of next week to find support in the House for the bills to have a chance at passage this session. If House support is not found they will die in Committee or on the calendar. While the 2012 session runs for 6o days, after day 50 it will be too late for any legislation which does not have support.

State Senator Mike Fasano, sponsor for both bills, has been a friend to animals during his time in the legislature. While it is possible that the bills can be reintroduced and passed in 2012, or later, they will have to find a new champion. Due to term limits, Senator Fasano will not be able to return to the Florida Senate after his current term. State law allows him to run for the house, but, according to his Chief Legislative Assistant, Greg, Giordano, the Senator has not spoken about any decision on his future plans.

As hopes for passage dim with each passing day, Giordano notes, “The session isn’t over yet. You never want to say anything until it’s over.” He continues, “This bill obviously has great value and so, if we have to, we’ll see if we can find other lawmakers willing to take it up next year.”

Meanwhile, there is still time for a House member to pick up the standard and try to carry the bills to passage in this session. 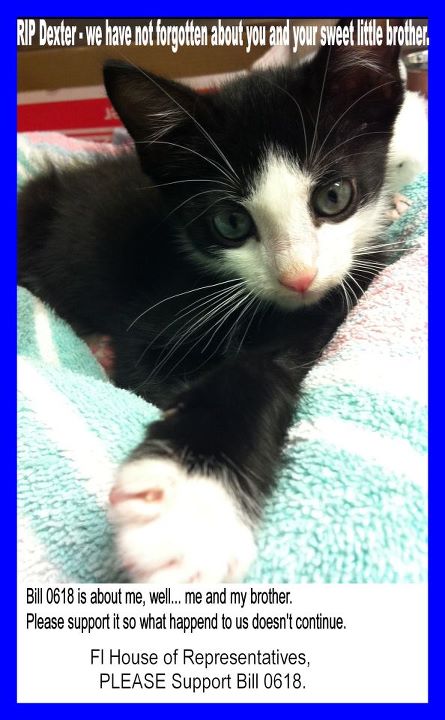