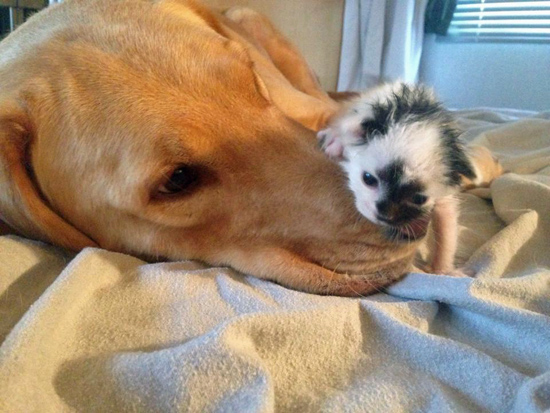 Panda was rescued when he was only a few days old. He’s flourishing in a shelter’s foster care program and has an unlikely new foster “mom!”

A woman rescued Panda when she spotted him – a tiny black and white bit of fur – sitting on a sidewalk. She rushed him to a vet who fed him and determined that he was only 1 week old. Not being able to give the newborn kitten the round-the-clock care he needed to survive, the woman called Helen Woodward Animal Center in Rancho Santa Fe, just outside of San Diego, California, and the animal center agreed to take him in.

The woman took the kitten to HWAC the following morning, and staff named the little black and white furball Panda, for the similarity in his markings to that animal.

Panda went into foster care with an experienced caregiver and made a very special friend who helps care for him.

According to HWAC, Shadow, the foster caregiver’s dog “is very serious about making sure this kitten is safe and happy.”

The adorable photos of Panda and Shadow show the sweet companionship Panda has found with his big friend.

Panda will be made available for adoption when he is big enough and old enough to find his forever home. At that time, he will be listed HERE.

Here is tiny Panda at HWAC before his little eyes were even opened: