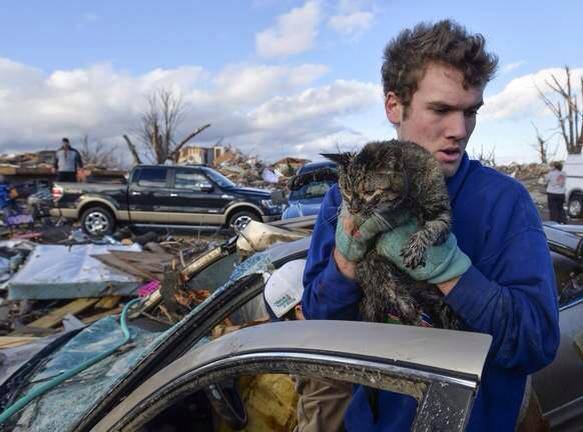 Courtney Smith is a 20 year old Washington, IL resident whose family lost everything in Sunday’s devastating tornado that ripped through that small city. The family’s home was completely destroyed, and Courtney’s car was smashed and damaged beyond repair.

The family’s three dogs were ok but they thought they’d lost their cat, Chloe.

Chloe survived the tornado and was rescued by a neighbor, and a photo of the rescue has been widely shared.

In the Peoria Journal Star photo from Monday, seen above, Chloe is being removed by the neighbor from Courtney’s demolished car.

The neighbor found the cat in a tree and somehow managed to get her down and put her into the car for safe keeping.  The frightened kitty wedged herself so tightly under the driver’s seat that her rescuers had to remove the seat to get her out.

Courtney wrote on a tornado recovery page that shared the image online: “This is my neighbor who saved my cat! I’m so thankful you found her and didn’t give up on getting her out! Chloe is thankful too, she is a little shaken up still is doing just fine!!”

“[I’m] very blessed to have her safe and sound again!!”