A couple with no pets and no experience with ferals rescued a little feral kitten who was unlikely to survive much longer on her own. They helped her adjust and gained her trust, and now Memieux is happily living the good life with her new family.

We heard from cat petmom and foster cat carer Sharon, from the Vancouver, BC area, today. Sharon’s friends Randy and Sally in Kelowna sent her the story of their recent rescue of a starving feral kitten, and Sharon kindly got their permission to share the story here.

Sharon said: “I asked them if I could share it because it’s heartwarming and the kitten is so sweet!” adding, “I should mention that these friends are not experienced cat rescuers, with no exposure to feral kittens and had no pets before this happened. So this was truly an unusual and unexpected experience for them.”

Here is Memiuex’ story, as told by Randy and Sally:

We have a kitten! Yeah, true story, we’ve had her for about a month now and I’ve been holding off on telling you about it because we first had to see how it would turn out. Because this is not your typical “we went to the SPCA and got a kitten” story.

She was feral. Yeah, we spotted her living under our neighbour’s porch, we have no idea where she came from. It was freezing here at the time, way below zero, and so after a few days of monitoring this poor kitten endure the elements we started putting crunchies out for her on our back porch and sure enough she’d come over and wolf them down. But, when we tried to quietly open the door, boom, she was gone! So, we called the Humane Society and they gave us a trap. That’s right, a trap, we trapped the little bugger!

Oh man, what an event that was, she went bonkers in that cage as you can imagine. We opened it in the bathroom and she bolted out like a streak of lightening, it was crazy! She was so scared she climbed the drywall to the ceiling! I’ve never heard so much hissing in my life. It took about 3 or 4 days of sitting in there with her, hours at a time and basically just ignoring her so she’d get used to us, before she finally calmed down and realized we had no intention of harming her. Feeding her was also helpful, obviously. When I finally touched her I was shocked by how skinny and frail she was, I was deceived by all her fluff but underneath it she was just a boney spinal cord and rib cage. She would not have survived much longer outside so our timing was good.

In time she became more and more confident and now today we have a normal, domesticated kitten living with us. We plumped her up with a healthy diet and named her Memieux. I made it up and tell people it’s French for meow. Some people actually believed me. A friend of ours is a veterinarian and he checked her over and told us she was probably 4-5 weeks old when we trapped her so she’s now all of 2-3 months old. He said she’s surprisingly healthy given her poor start, no ear ticks, etc. We’re giving her a de-wormer, however, only as a precaution but he doesn’t think she has worms either.

Anyway, she now follows us around the house everywhere we go, purring instantly when contact is made, and sleeps with us in our bed. However, she’s still a bit skittish with company so the socializing thing is still a work in progress. We’ve really taken to her, she’s so funny and playful.

The photos below show Memieux’s progress, beginning with her outside as a littlr stray baby, continuing to her time in the bathroom and finally to her days as a happy little kitten feeling comfortable in her home. 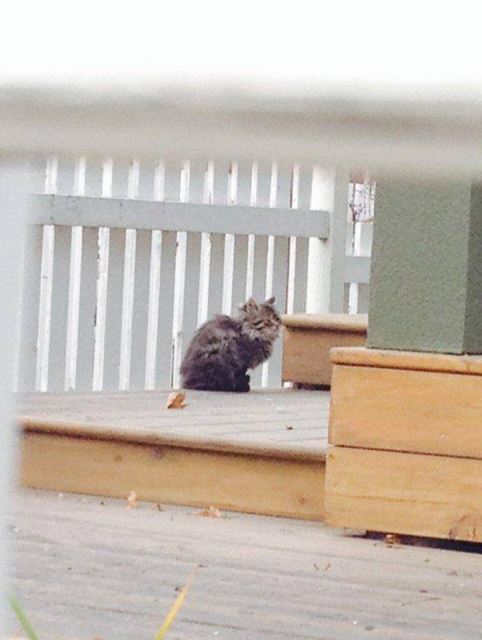 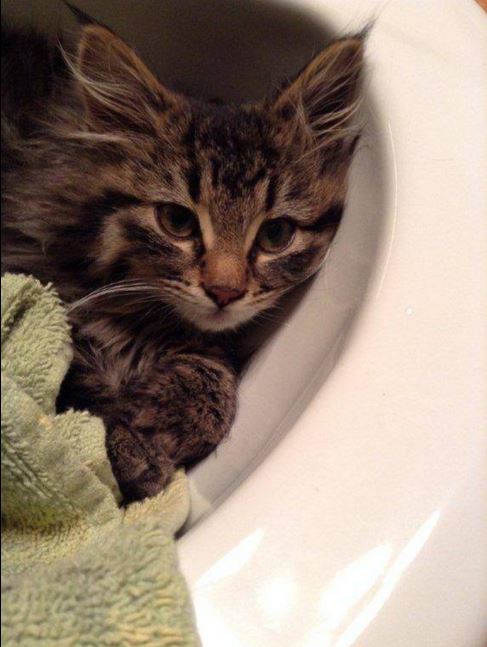 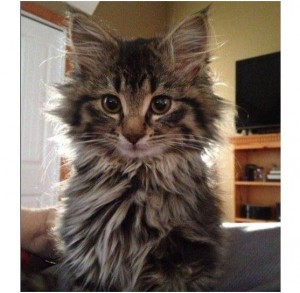