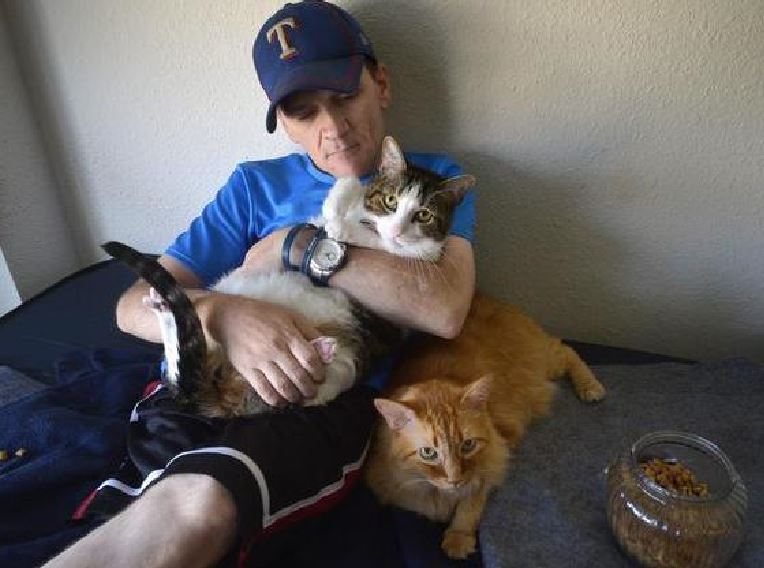 Gary Coleman, disabled since birth, relies on emotional support from his two “assistance cats.” However, management at his assisted living facility has enacted a “no pets” policy for tenants. Now Coleman must find another home for his long-term companions Rex and Milo or find another place to live, unless a lawsuit allows him to remain in his home.

Gary lives – at least for the time being – at Mirabella Assisted Living in Benbrook, Texas with the two cats he relies on as his only source of emotional support. He has spina bifida and a serious lung condition, and uses a walker, and told the Fort Worth Star-Telegram he has no family other than his 8 and 12 year old feline companions.

He is facing eviction after being informed by Mirabella management that he was in violation of a no pets police enacted for tenants who share an apartment.

“Rex and Milo are not pets; they are therapy animals and they are my family,” Gary told the Star-Telegram. “I have no family. I have no mother or father. My cats provide something that no family has ever given to me and that is emotional support.”

Gary received notice on August 1 that he had until August 10 to get rid of the cats or his lease would be terminated, and he now has until September 11 to get out himself since he did not comply.

A court petition filed this past Monday says he pleaded with management for an exemption for Rex and Milo, to no avail. He is suing Mirabella, along with its director and parent company Segora Corp., alleging that management violated the Texas Fair Housing Act the Fort Worth City Code and the Texas Property code.

In an effort to keep his home, Gary is suing Mirabella and its director and parent company Segora Corp., saying that management violated the Texas Fair Housing Act the Fort Worth City Code and the Texas Property code. His lawsuit states that management’s refusal to make a “reasonable accommodation” for the cats constitutes unlawful discrimination under the Housing Act and the City Code, and Mirabella “retaliated again him by terminating his lease,” which violates the Texas Property Code.

Gary says Mirabella is violating his lease, which he says allows the cats. Mirabella says pets are not allowed in shared apartments.

At issue is management’s contention that since Gary does not have documentation that Rex and Milo  certified as therapy pets they are not exempt from the no pets rule. Gary’s attorney, Randy Turner, said he provided Gary’s psychologist provided documentation confirming his need for the therapy cats and added that Rex and Milo don’t have to be certified as therapy animals.

“Mirabella simply does not understand the Fair Housing Act or the law on assistance animals,” the attorney said. “There is no such thing as a certified therapy animal and the law does not require that an animal be certified in any way before a landlord must provide accommodations.” He added that under the Fair Housing Act a landlord must provide a “reasonable accommodation” so as not to discriminate against a disabled person who relies on an animal for emotional support. He noted that the law does not address situations where the therapy pet owner lives in a shared apartment.

Gary’s extremely limited income from SSI makes it impossible for him to find privately owned accommodations. He gets $644 a month in SSI payments, and pays $630 a month for rent and meals at Mirabella. Added to that, Rex was diagnosed with diabetes recently and requires two daily doses of insulin and special food. Gary is able to provide treatment for Rex thanks to donations.

Gary says he relies on Rex and Milo every minute of the day, except when he must leave the apartment.

“There is no way that I can function on a daily basis without my cats. I go to sleep every night and wake up every morning,and they are right beside me. I see them lying there,and I give them treats and a big hug.”

.
Gary talks about Rex and Milo and their importance to his life and well being: