Danville, VA firefighters rescued Tootsie the kitten from a residential fire at his trailer home on Wednesday and revived him at the scene with the aid of a pet oxygen mask.

“It’s real rewarding especially when you see the owners reaction. It’s like a lot of them’s kids. People’s animals are just like their kids,” firefighter Neil Bailey said.

The Humane Society provided medical services and cared for Tootsie until his family was able to reclaim him. They made a followup post on the kitten at Facebook on Friday, writing: “Tootsie, the kitten that survived a house fire, has gone home. His veterinary bill will be paid from funds that were given to us by the Community Foundation of the Dan River Region (VET Fund). We have offered to help neuter him in about a month.”

Sadly, Firefighters brought a second cat out of the trailer in an attempted rescue but it did not survive. 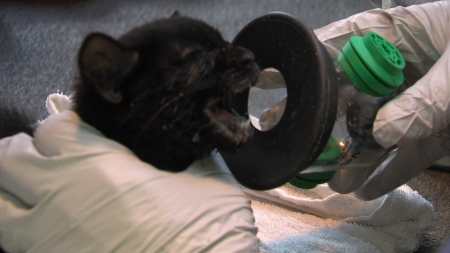