.
The kitten at the heart of an animal neglect/abuse case has recovered and gone on to find a good home, but her original owner was given a lifetime ban on pet ownership for gross neglect after the kitten was accidentally injured and she did not provide much needed care.

On August 11, 2014, Chelsea Salter of Kingston, Ontario, pleaded guilty to permitting distress to an animal under the Ontario SPCA Act. The kitten had fallen into a hot deep fryer, and was found inside a coat closet without having received veterinary care.

Ontario SPCA Agents attended Ms. Salter’s property and discovered what appeared to be a five-to-six week-old kitten lying on the floor of a coat closet. The kitten was lethargic, withdrawn and had burns on the legs and stomach area. Ms. Salter claimed the kitten had jumped into the deep fryer and was unable to afford veterinary attention. The animal was subsequently surrendered to the Kingston Humane Society, an Affiliate of the Ontario SPCA.

Ms. Salter was sentenced by the court and received a lifetime ban on owning, caring for or living with any animal. She was ordered to immediately surrender all animals in her care to the Ontario SPCA. She also received a two-year probation during which time Ontario SPCA Agents are permitted to inspect her residence to ensure compliance.

The kitten is now doing well and has since been adopted into a loving home.

“The Ontario SPCA encourages the public to call the Society should they have a concern for caring for their pet,” says Steve Toy, Senior Inspector. “The Society is happy to share what resources are available to assist the pet owners to be sure that no animal ever goes without adequate care.” 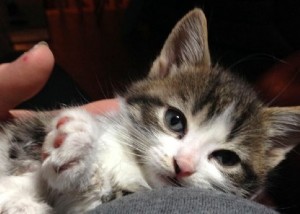