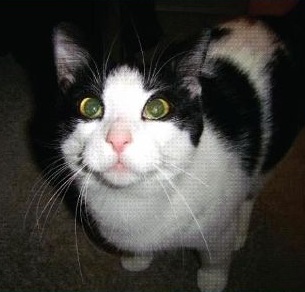 Rumors that the cat found frozen to death at Edmonton International Airport in November was not the missing George, who was lost from the cargo hold of an Air Canada flight on a stopover on September 23, and has been the object of a search, have now proven to be true. Reports confirming this started circulating on Thursday, and have been further confirmed by a CBC story posted last night.

Petmom Vanessa Summerfield has not made herself available to speak with reporters very often, but she spoke with  CBC News about the misidentification of George.

Because Ms. Summerfield was not able to travel to Edmonton, a representative from a nearby rescue group involved in the search (Little Cats Lost, we think) was appointed to view the deceased cat’s body before cremation. The cat found frozen to death turned out to be a female, so could not possibly be the missing George, a male.

Ms. Summerfield is quoted by CBBC News saying of air Canada, “I’m so mad at them because they wanted me to take their word that it was him.”A source close to the story says that the petmom did not have complete confidence in the airline’s story of the death when her calls and emails were not promptly returned.. While the rest of us accepted the story of the deceased cat’s identity, at least a few advocates for the missing cat did not believe that cat was George. Their hunch has turned out to be correct.

The skeptical advocates are also not convinced that the deceased cat froze to death but have not indicated that they know of a different cause of death. Air Canada is said to have tried to get the deceased cat cremated before anyone close to the case could view the body; possibly, to get the case behind them with as few remaining questions as possible.  Advocates for George say that they will see to it that the female’s ashes are respectfully scattered over the area she called her home.

The dedicated group who had organized to try to find George are even more concerned about the missing cat’s health and safety now, as the months drag on and the airline and airport have stopped looking or putting out food. The advocates note that local cats can take the region’s cold, but we note that a weakened cat is more vulnerable to seasonal extremes.

There are new posters up in the area alerting the public to the fact that George is still being sought and is unaccounted for. Two people are setting humane traps at the airport in an effort to locate George. At least one other black and white cat, known as “the other black and white cat” has reportedly been sighted on airport grounds, and there may be more. Those cats may end up in the traps before George does, and the searchers are aware of that possibility. The deceased female is thought to have delivered a litter a few months ago, so her kittens may fit the profile for George.

The story, and possibly the ordeal, of this cat gone missing after being entrusted to an airline continues along its odd and uncertain path.  Hopefully, this bizarre twist will keep George’s name out there and help the searchers get more cooperation from the airport and airline now. Maybe, maybe not.

Supporters have a Facebook page, George Is Lost at Edmonton Airport.

7 thoughts on “In a startling reversal, deceased cat found at Edmonton Airport is not the missing George”