A rescuer was in the right place at the right time to save an injured kitten who’d been thrown from a moving car. After he ran up under her car, a delicate rescue operation was required. Heath’s rescuer is now his foster mom. 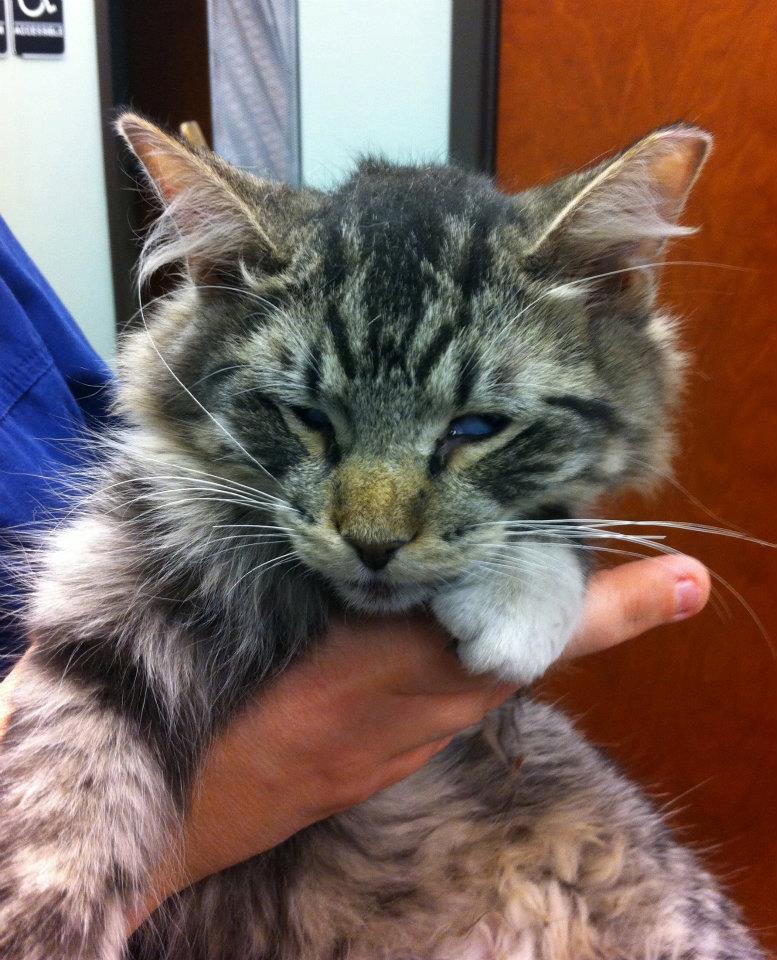 Sonya Parker writes about a recent rescue she made when chance or providence placed her in the right place at the right time.  Heath is an ear-tipped yet friendly and socialized cat Sonya found injured after he’d been thrown from a moving car. The incident occurred as the nearby city of Fort Worth engaged in heated public discourse over a proposal to adopt a citywide TNR program. Readers may recall our stories on the disappearance of the Trinity Park cat colony, which also occurred during this period of discussion. Many suspect the cat hater side of the argument in these incidents. Sonya’s story is not about those with mal intent toward cats; it is about one cat and her experience saving him and bringing him to a better life. Sonya is currently fostering Heath, in association with Fort Worth rescue group Kool Kats and Kanines, where she is a volunteer. She fosters for the group, and adopts animals out at the PetSmart on Bryant Irvin Road in Fort Worth.

On Wednesday, January 18, 2012, I was traveling on 287 between Sublett and Little Road, in Arlington, Texas when I saw a kitten laying on the right shoulder of the highway with his paws crossed and his head resting on them with his eyes closed.  I felt sure that the kitten was dead, but I decided to stop because of the way it was laying.  As I pulled into the grass along side of the kitten, it raised its head and turned to look me straight in the eyes.

Before I could get out to help him he quickly crawled under my car. Due to my car being low to the ground and the height of the grass, I was unable to determine where Heath was under my car.  I tried moving forward slowly three or four feet and then I would get out to see if he was laying in the grass and he wasn’t.  I did this about three times and when I didn’t see him I knew that he was in the frame of my car.  The area was very busy and I did not want him to run out from under my car and be hit by a car.  I felt like I had no choice but to drive slowly to my office.  I drove the 6 miles back to work going 10 miles per hour watching behind me in case the kitten fell out. Maybe my driving with Heath under my car was not the best solution, but at the time I felt I had no other choice.  I felt that getting off of the highway was not only a safety issue for Heath, but it was for me as well.  Since no one had stopped to help Heath, I did not feel that they were going to stop to help me get Heath out from under my car.

When I got to my office, my boss was there waiting to help me.  We immediately located Heath and tried to get him out from under the car.  He was in a very tight spot and was holding on for dear life.  I called my daughter Heather  and she came to help us.  We had to jack the car up so she could get far enough under the car to reach him.

It took Heather 1 1/2 hours laying on her stomach while looking  up and reaching up trying to get him out.  All the while Heath allowed us to pet him while he purred.  He would occasionally lightly put his teeth on my daughter’s fingers, but never really bit her.  The sun was going down and he started shaking, so we knew we didn’t have long to get him to the vet. We took great care in not trying to be too aggressive in getting him out, because we obviously did not know the extent of his injuries and did not want to further injure him.  My daughter worked at a emergency vet for a year or so and thought that his right rear leg looked like it might be broken.  She finally got hold of him and just pulled really hard and she was able to get him out.

We rushed him to the emergency vet where he was diagnosed with a broken right rear leg, road rash on his stomach and under his chin, and his pads and nails were either missing or damaged from being thrown out of a moving vehicle where the posted speed limit is 65 mph. The emergency vet said that he felt that Heath’s injuries were consistent with being thrown from a vehicle.

Heath’s leg was splinted and he was given time to see if the leg would begin to heal. After two weeks the vet said the leg was not healing, and the decision was made to amputate. Heath had his amputation surgery this past Thursday. When I saw Heath’s tipped ear, I knew he had been part of a TNR program and the vet has confirmed that Heath has been neutered.  Heath is not a feral kitten at all.  He is one of the sweetest, loving and affectionate cats that I have ever met.  I not only have my own cats at home and at the Law Office where I work, but I also practice TNR and feed feral colonies.

I questioned whether or not what happened to Heath was a result of the TNR issues in Fort Worth. I have attended two of the meetings and there were some very angry people there, so I would not be at all surprised. I have been in contact with Ro Williams with the Trinity Park cats and she did not indicate that Heath was one of their cats. Other than that, I would not know where to begin to try to find out if he is part of someone’s colony.

Heath is 6-8 months old and is a very sweet and loving kitty who did not deserve this horrific act against him.  It is a miracle that this little guy survived at all.

So far, Heath’s medical bills are about $1.500.  The rescue group operates on a shoestring and is gladly accepting donations on Heath’s behalf. The group has a PayPal account linked to its Facebook page (link below). They also accept donations mailed to P.O. Box is 26991, Fort Worth Texas 76126,. Donations can also be made over the phone, directly to their vet, Richter Animal Hospital and Pet Resort  (817) 478-8000.  Donors need to specify that the payment is for Heath’s surgery.

You can visit Kool Kats and Kanines on Facebook to learn more about their mission and activities. The group describes itself as a no-kill pet shelter and a non-profit organization that rescues dogs and cats, and places them in foster homes so they can have a second chance at finding a loving home.
All of our pets stay with foster parents until we find homes for them even if it means staying in foster care for years. We have pets that have been with us for up to a year or more and we don’t give up on them. We are determined in finding each one of this wonderful pets a home.