Have you heard of Adlai Grace? It’s likely that you may have. Adlai joined a family with another famous kitty, Willow.  Talented and compassionate petmom Wendy Matthews, of  Mancelona MI, has a soft spot for special needs kitties. Willow is a young girl born with deformed legs in December 2010;  Wendy took Willow when nobody wanted her and gave her a wonderful life.  When Adlai Grace was found crippled from injury and severely malnourished on a Michigan road last August, Wendy took her, too.

Adlai and her six tiny siblings were found on a bumpy back road, mostly scattered around near the box they were obviously dumped in.  Two kittens were dead and draped over the side of the box. Adlai was immobile. All were seriously malnourished. Two more kittens died the afternoon they were found; that left three kittens to be rehomed. 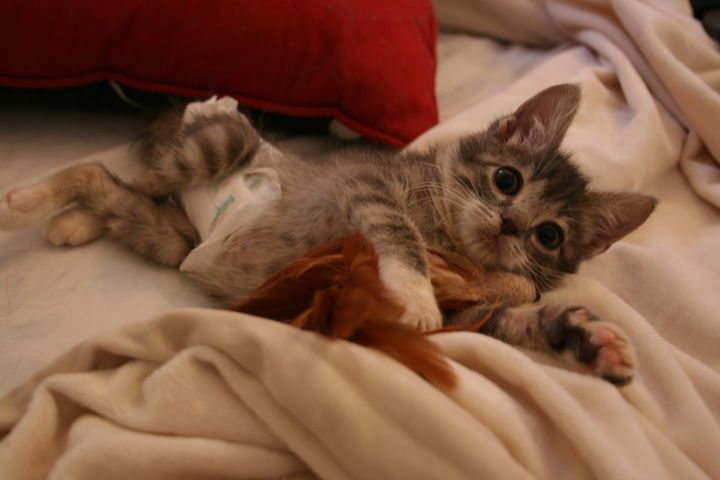 Wendy is well known for her experience with Willow, so she was asked to take Adlai, who was paralyzed and incontinent. Adlai was also tiny, sweet and adorable, and much loved by Wendy and by her many far flung friends who came to know her through Facebook and her videos. While Adlai was first introduced to the world on Willow’s Facebook page, she later got her own Adlai Grace Facebook page.

Adlai was pampered and loved and given physical therapy to help make her strong. Xrays showed a severely twisted spine that all medical professionals who’ve seen them agree was the result of injury and not a birth defect. It has been suggested that the spine looks like Adlai may have been slammed against a pole.  The misaligned spine caused Adlai’s organs to go out of place, including her little lungs. Adlai’s lungs were the direct cause of her death on October 12, 2011. Adlai was doing fine, then began to have difficulty breathing. Soon after, she was dead. Wendy carried her dear baby kitten in her arms, unable at first to believe that her spirit has passed from her damaged little body, but it had.

Please watch the video below. It is about Adlai and her little life, and the message of love that Wendy wants to share. Wendy has other feelings about Adlai’s injury and passing, but we will address those in another post.

This is about love.