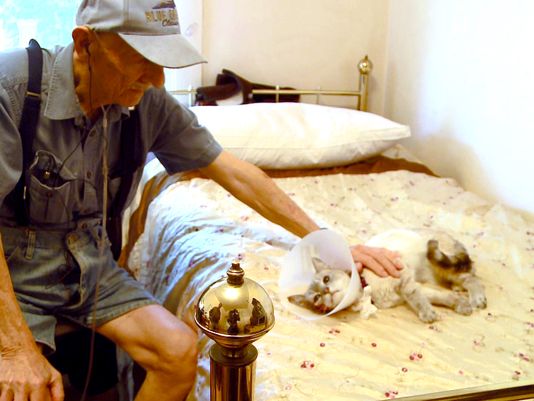 A few months ago, and just as he received a terminal cancer diagnosis, 85 year old Denver, Colorado resident Bob Scofield’s beloved cat Baby went missing. He found her again thanks to a group of strangers in his neighborhood who he now counts as friends.

“To just all of a sudden have that cat missing, the world was just falling apart,” Scofield told KUSA news.

Bob was not just worried he wouldn’t see Baby again, he was upset at not knowing whether his cat was dead or alive.

Bob’s caretaker lives with him and tried to find the cat, posting flyers throghout the neighborhood.

“Out of the corner of my eye, I saw a sign for a lost cat,” neighbor Jeff Cook said.

Jeff and some other neighbors wanted to help and posted Baby’s missing cat info at an online forum called nextdoor.com.

“This woman, a neighbor, she had found the cat just walking down the street. Her daughter said ‘look! A kitty! A kitty!” Cook said.

Baby had been hanging around a neighborhood resident’s house four blocks from home.

After eight long weeks of waiting and not knowing, Bob was reunited with Baby when she was brought back home to him.

“You can’t love an animal more than one that’s been gone for two months and then comes back,” Scofield said.

“I’m so glad to have her back,” Scofield said.